June 02, 2021
There has been a HUGE development - over 3000 [F]auci's emails have been released under the Freedom Of Information Act. These emails are damning when it comes to the origin of the virus and the efficacy of mask wearing. Arrest [F]auci NOW.
https://www.bbc.com/news/world-us-canada-57336280
(Q) The Storm Rider has posted some interesting tweets. Look for the tweet about the Daily Mail story on China's 'artificial sun'. The tweet features the words, 'Who owns the sun will own the Earth'. We were warned to expect some extraordinary revelations. Humanity has been lied to for millennia on a scale that is incomprehensible.
https://twitter.com/littleb29872980?lang=en
Pam Gregory and Bracha Goldsmith are two highly experienced astrologers - it is always delightful when they do an informal chat video. In a recent video chat they discuss the huge significance of the US Pluto Return on 4th July (watch from 17' 45").
https://www.youtube.com/watch?v=FbUbw4uOSkw
'There will be a whacking fundamental change of leadership or government of US in the next three to four months...This will be the first domino to fall...the domino effect will be felt across the world.' (Pam Gregory)
Dolores Cannon was a prolific regression therapist - she regressed thousands of people and wrote many books. During multiple regressions her clients talked about the Ascension time we are in now. Here are excerpts from the book 'The Three Waves of Volunteers and The New Earth' by Dolores Cannon...
'This is the big one. This is where you, as a planet, awaken out of the dream of thinking you're alone. That you're all that is...All eyes are on Earth right now...Many fought to be here...to carry the identification of having been on a planet that will be known through the multiverse, even if you can be here for a few hours, that you could say, "I was on Earth at the time of evolution".
'The orchestration to create this experience is so much bigger than any human can perceive at this time. This is a big orchestration, not just occurring on your Earth, but with the help of so many. And no other planets have done this before...There are those even from other universes that are watching.'
Finally, Anons are waiting expectantly for President Trump to return in full force to social media and the rally circuit. Pepe Lives Matter on Gab adds some levity to the [F]auci email release.
What Trump's first post in his return to social media should be: 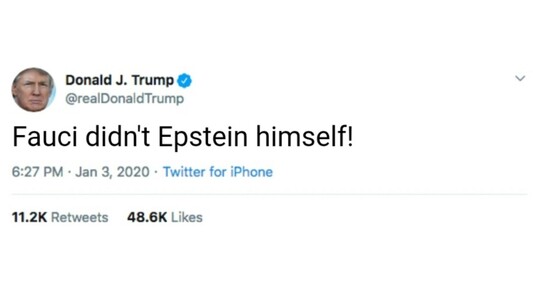 As I have often said, when the dominos start to fall, it will involve multiple events all at once. Even Pam Gregory used the analogy of falling dominos in reference to the 4th July astrological indicators. I think we can all agree that we are heading into very stormy waters in coming weeks. It has to be done. We have to guide humanity through this storm to find safe harbor on the other side.
We cannot stop now - and NOTHING CAN STOP WHAT IS COMING.
Thank you for reading this post. You are welcome to share it as long as you re-post it in its entirety, including the link to my blog site.
Where We Go One We Go All.
Love and Light
Sierra