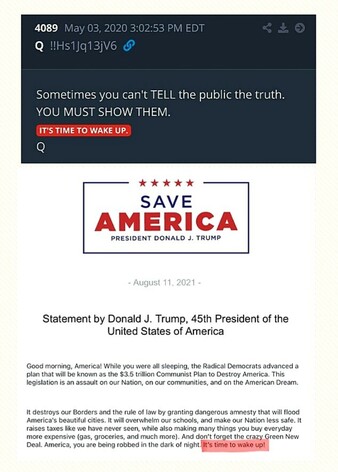 The fall of a massive domino could be a blink away. No wonder Cue always said, Watch AZ.
Neon Revolt on Gab https://gab.com/NeonRevolt
A very important point was brought up at the #CyberSymposium last night.If Arizona decertifies, Biden is no longer the president of the UNITED States.He becomes a walking constitutional crisis.Decertification needs to happen as soon as possible.
...And this is how that domino could fall. Mike Lindell's cyber symposium has been crucial to the Alliance plan. Neon Revolt again.
At the #Cybersymposium: The auditors just discovered that IPv6 was enabled on the system and that a foreign machine was communicating across a web front end to the election system via the internet on election day.
Mike Lindell is an important factor in the Alliance Plan. TRUST the Alliance - they are in full control.
M3thods on Gab https://gab.com/M2Madness

A Light Warrior friend in St Paul Minnesota reports that ten military transport planes landed yesterday at his local airport. Many Light Warriors are noticing a marked increase in military activity in their area. Apparently troops are checking into hotels in Washington DC.
The Pope interrupted an 'audience' to take a phone call and excused himself! Yes, things are really heating up in [D]eep [S[tate land. Panic is escalating as the [s]atanists finally see that their end is near.
The national EBS test seems to have been almost a non-event. Anons are speculating that the Alliance used it as a test to see how the DS would react if they thought it was a real live event. The GLOBAL EBS will come when everyone least expects it.
Stay calm, World Patriots. We are fighting back but we are not losing our heads in the process. Take a leaf from the books of such steely calm Light Warriors as President Trump, General Flynn, Sidney Powell and Mike Lindell.
WE'VE GOT THIS.
Thank you for reading this post. You are welcome to share it as long as you re-post it in its entirety, including the link to my blog site.
Where We Go One We Go All.
Love and Light
Sierra