We Are Our Own Saviors

October 10, 2021
Praying Medic has posted a message from US Senator Kelly Townsend that describes how the death blow is being dealt to the [D]eep [S]tate. WE are doing it! We The People are our own saviors. 'The most powerful people in the country right now are the employees. They will save America.' (Kelly Townsend)
https://t.me/praying_medic/5717
Southwest Airlines cancelled ONE THOUSAND flights yesterday after cancelling 800 the day before.
https://bigleaguepolitics.com/breaking-southwest-cancels-over-1000-flights-for-a-single-day-some-speculate-pilot-strike/
Think about it. Air traffic controllers and flight industry employees are walking off the job in the thousands. THIS is what will wake people up. When people can't hop on a plane to visit Aunty Joan in another State - even when they are FULLY JABBED - they will get angry. FINALLY.
Great news - 1.5 million people tuned into RSBN's coverage of President Trump's Iowa rally. That figure doesn't take into account people who tuned into other sites like Newsmax where I usually watch it. BOOM.
https://gab.com/RSBNetwork/posts/107079553847485027
Heinous [D]eep [S]tate actions are being forced into the Light by whistle-blowers. It turns out that up to 200 US Congress members and their friends and family were secretly treated with Ivermectin when they had the virus.
https://gab.com/TheSharpEdge1/posts/107077537019966357
A reminder from Major Patriot of the breath-taking hypocrisy of the [D]eep [S]tate...
https://gab.com/MajorPatriot
The same Government Lawmakers that:
- Subject you to a vaccine mandate are exempt from the same mandate- Outlaw Ivermectin as a COVID treatment for you...use Ivermectin to treat themselves for COVID- Would throw you in jail for insider trading become multi-millionaires via insider trading
Take the time to scroll down QAnon76's Gab feed for the short video of pro mountain biker Kyle Warner describing his terrible experiences after the second jab. This previously fit young man has had his health destroyed.
https://gab.com/QAnon211
That disgusting creep Prince Andrew will be sweating profusely with this news about Ghislaine Maxwell. 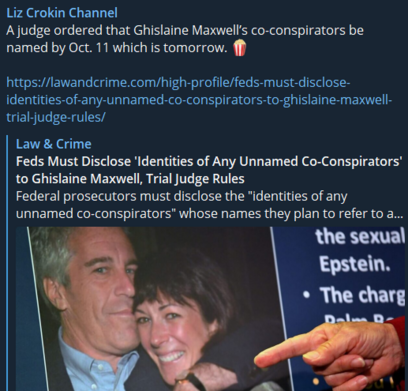 Finally, check out this HUGE crowd of un-masked people at a USA football game. Tens of thousands of people are refusing to wear masks and chanting 'Let's go Brandon' at sporting events over the entire country. The Scamdemic IS OVER.
https://gab.com/FreeTheTruth1/posts/107075826702057049
As we approach summer here in New Zealand, there are no words for the bewildering sight of virtually EVERYONE wearing masks as they stroll from shops to their car. The fact they are not ripping off those masks and gasping for fresh air shows the extent of the mind-control.
We Light Warriors are holding the line during immensely challenging times when often we are the ONLY awake person in a sea of sleepers. We are amazing.
WE'VE GOT THIS.
Thank you for reading this post. You are welcome to share it as long as you re-post it in its entirety, including the link to my blog site.
Where We Go One We Go All.
Love and Light
Sierra