Showing posts from March, 2021
Show all

This cryptic tweet from the US military links to a Cue drop, indicating possible internet shutdowns. Cowboyw2b... U.S Cyber Command tweet includes, “Be proactive and back up your files“ Q#993 includes, “Learn how to archive offline.” Note that #993   is dated April 2, 2018, which has a 3-year delta on Friday (2-days ahead of schedule). RealXAnon at Anonup has a theory about Gibraltar that fits in with Cue's drops about  Red Castle. WHAT LAYS IN THE TUNNELS INSIDE THE ROCK?? WHERE DOES THE GIBRALTAR STRAIT LEAD TO..?? WHAT LAYS BENEATH THE GIBRALTAR STRAIT?? CASTLE ROCK - CASTLE RED - KEY STONE!!!! The Mediterranean has become a VERY hot spot for global military. Watch this space. https://twitter.com/Littleb29872980/status/1375487203699273730 Congressman Matt Gaetz is being accused of [s]ex trafficking a 17 year old girl. He has always been a staunch supporter of President Trump - it appears he is being framed by the [D]eep [S[tate. Raheem Kassem on Gab... U.S. Attorney Letter Confi
4 comments
Read more

President Trump used Telegram to condemn the actions of [D]eep [S]tate [C]OVID operatives Fauci and Birx... https://t.me/s/real_DonaldJTrump/13434 As Anons point out, it is extraordinary for a USA President - former or otherwise - to speak out so harshly against top government health officials. I believe that President Trump is seeding humanity's consciousness for the revelation that the [D]eep [S]tate orchestrated the Plandemic/Scamdemic. I also believe the wedged EVERGREEN ship in the Suez Canal fulfilled a similar purpose. Were there [s]ex-trafficked children in those containers? We may never know. What we DO know is that EVERGREEN was the Secret Service codename for [H]illary [C]linton - and she was one of the most heinous [s]atanists involved in [s]ex-trafficking, eg Haiti. When the details of global [s]ex trafficking are made known to humanity, people will remember that ship. They will realize that the Alliance was sending them a message before the Big Reveal. Speaking of P
10 comments
Read more

Containers To Be Unloaded From Ship 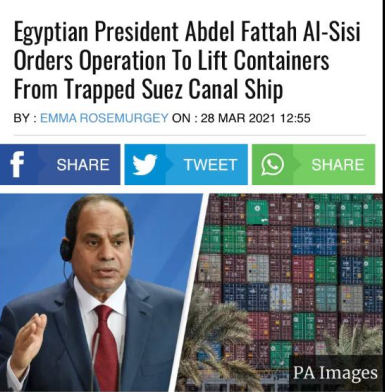 The Egyptian President has ordered the unloading of containers from the EVERGREEN ship Ever Given which is wedged in the Suez Canal. BOOM.  Major Patriot on Gab... The [D]eep [S]tate has to forecast their evil deeds as part of Universal Law. Watch this three-minute excerpt from an episode of Dexter from December 2012 - EVERGREEN shipping container and rescued child. Wow. https://www.youtube.com/watch?v=ungtogUJc_U&t=184s The depravity of the [D]eep [S]tate is there for all the world to see in the new Satan shoes containing a drop of human blood. These shoes are associated with Nike which is desperately trying to deny the connection. How many pairs of these shoes were produced? 666. https://www.nbcnews.com/pop-culture/pop-culture-news/nike-denies-involvement-lil-nas-x-satan-shoes-containing-human-n1262280   There are global signs of something BIG about to happen. Yesterday a top Australian TV network experienced a 'cyber attack' that took it completely off air. Today we ha
3 comments
Read more
More posts