March Gets Off To Flying Start

Texas and Mississippi have both ended their mask mandates and are now 100% open for business. This is great news! Now watch all the other states (and countries including NZ) demand their freedom too.

We the People have had enough of the BS.
Kim Runner...

The third of March is the three-year anniversary/delta for this Cue drop about March Madness. The date 3/3 is the Christ consciousness Master number. It was hijacked by the [s]atanists - what a perfect day for karmic justice.
Delta. 3/3 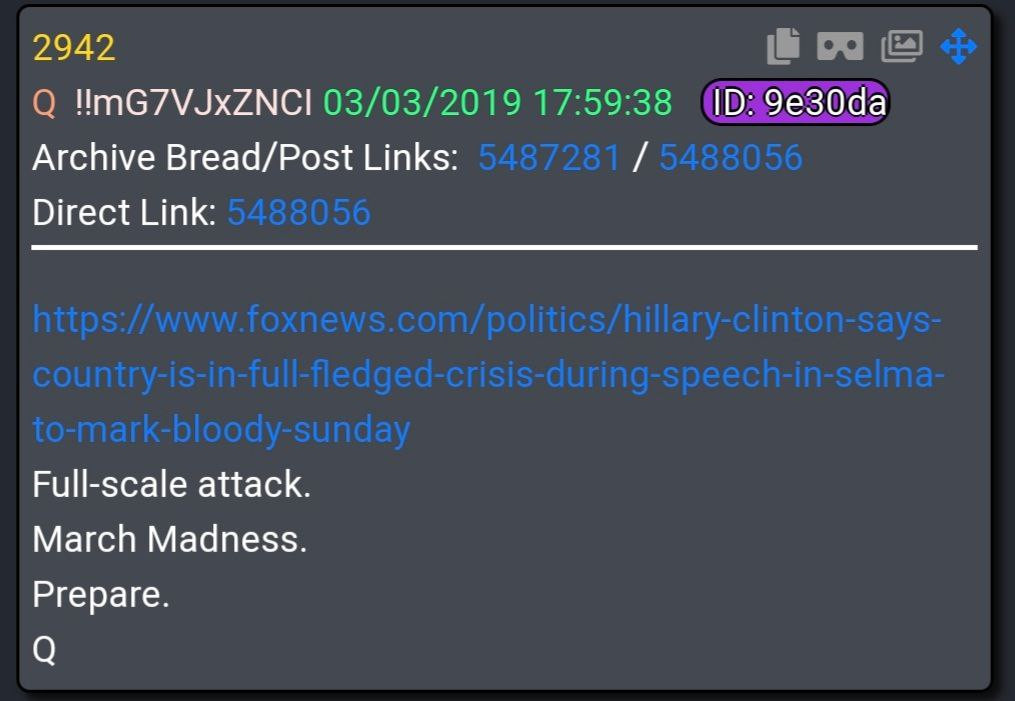 Ripper Duck makes a very good point here. Why are the [D]eep [S]tate celebrities not partying and celebrating [B]iden's 'win'? Or should the question be - Where are they REALLY...?' I love how Ripper Duck describes [B]iden as a 'plate of mashed potatoes'.

Something is very odd. Where the hell are:MadonnaChelsea HandlerAlec BaldwinGeorge Clooney and his tranny wifeAnglie JolieThe Schumer heifer womanOprahThe HanksClintonsObamasKathy GriffenRob ReinerWoody AllenBarbara FeinsteinEllenBushesCheneysand many, many more?After all, their plate of mashed potatoes won the WH, it should be non-stop partying and media blitz to promote DJT leaving. Remarkable that they've damn near disappeared. Now, it could be they're no longer useful, were gotten rid of, and a new circus full of clowns will emerge. But, billions were spent promoting the above-mentioned list of hacks, you'd think their handlers would get more of their investment back...

Doq Holliday reminds us why the Alliance is DEFINITELY winning the war to liberate humanity.
White hats control quantum computing.Meaning white hats can compute every possible scenario based on prescience related to quantum timelines.It's a pretty surreal pill to swallow.
Ghost Ezra reminds us why President Trump needed to step back at this time.
Trump had to get out of the way publicly while the diseased temple collapses. By the time it collapses, even the left will be begging for him to come back.
One of my blog readers, Mr E shares two pieces of important intel...
Firstly, the razor wire fencing is being removed from around the White House/Capitol area. Let's pray it is because the tunnels have all been cleared.
Secondly, today SpaceX17 was launched in Florida, launching the new Starlink satellite internet. As Mr E says, 'Dark to Light'. And love the number 17.
Finally, Dr Michael Salla,  a great Secret Space Program researcher, shares information about med bed technology.
https://twitter.com/MichaelSalla/status/1366420044167581712
Exciting times ahead, fellow Light Warriors. Do remember to relax and enjoy the show. We chose to be present during THE most extraordinary time in Earth's history.
Where We Go One We Go All.
Love and Light
Sierra