Demise Of The [D]eep [S]tate

Laws are being passed that mark the end of the [D]eep [S]tate reign of tyranny on Earth. Witness the reaction when a US Congress bill was passed banning gain of function research in China...

https://rumble.com/vhncfn-senate-erupts-in-cheers-as-funding-for-gain-of-function-research-in-china-i.html?mref=7gabl&mc=5lg0g
There are examples of [D]eep [S]tate demise and accompanying panic everywhere. All eyes on Georgia.
Pepe Live Matters on Gab re-posts Midnight Rider from Telegram.
https://gab.com/PepeLivesMatter17
Georgia has officially hired top notch criminal defense lawyers to stop the audit.Imagine hiring a criminal defense lawyer but also telling everyone you definitely did nothing wrong.

Their panic is delicious.https://t.me/MidnightRiderChannel/18713
Wisconsin has joined the White Hats, launching an investigation into the November election.
Praying Medic on Gab.
https://gab.com/Praying-Medic
Wisconsin state Assembly Speaker Robin Vos announced he is hiring retired police officers to investigate the Nov. 3rd election. Vos, a Republican, told local news outlets that he will hire three retired officers who will work with an Assembly committee to look into thousands of complaints and tips that were provided after the November 3rd election.
Pepe Lives Matters again, re-posting this great post from Brian Cates. Love it.
17. 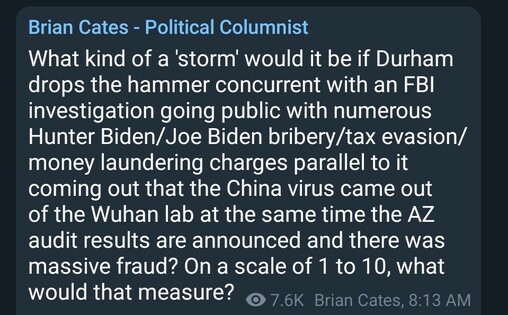 Finally, this Relentless Truth post on Gab describes the far-reaching impact of the Alliance operation.
https://gab.com/Lebronsonroids
Nobody trusts the MSM anymore.
Nobody trusts the politicians anymore (D or R)Nobody trusts Big Pharma anymore.Nobody trusts the CDC, WHO or Bill Gates anymore.Nobody watches sports anymore.Nobody watches movies anymore.Nobody watches award ceremonies anymore.Trump and Q pulled back the curtain and exposed the underbelly of evil and corruption to the entire world.This is why nothing can stop what is coming.This is why "We The People" awake and unified is [their] biggest fear.We are no longer enamored with flashy celebrities.We no longer blindly trust people in positions of power to dictate our freedoms and regulate how we live our lives.We are no longer blind to their schemes. Playbook known.We are no longer blind to the fact that WE elect THEM to work for US.This is the greatest country in the history of this planet and we almost let it slip through our fingers and into the hands of a small group of satanic globalists because we became complacent. We took what we had for granted.The more I look back on this past year, the more I realize how important and necessary it truly was.The country as a whole had a laundry list of lessons to learn. We played a part in this and we don't get to pretend that isn't true. The truth can be harsh sometimes and this past year was all about coming to terms with that.Q and Trump took the boot off our neck.Then they taught us how to expose corruption and fight back with relentless truth and righteous indignation.The ball is now in our court.We The People are more awake than ever and not a damn thing can stop us.Because where we go one...
Wise words indeed. We Light Warriors have suffered the effects of slings and arrows in recent years as we held the Light while Earth's unaware population slowly woke up to the truth of their reality. It wasn't easy. Now there's an understatement. However, we did it. And now people are waking up all over the planet. It was worth the effort, friends.
Thank you for reading this post. You are welcome to share it as long as you re-post it in its entirety, including the link to my blog site.
Where We Go One We Go All.
Love and Light
Sierra