June 12, 2021
This Cowboyw2b post links President Trump's latest statement to a Cue drop.
https://anonup.com/@Cowboyw2b
Today Trump posted, “Have you noticed that they are now admitting I was right about everything…”

Q drop, from 10.31.17 says, ”Has POTUS *ever* made a statement that did not become proven as true/fact?”Note how the two similar statements just HAPPEN to line up on the qclock. 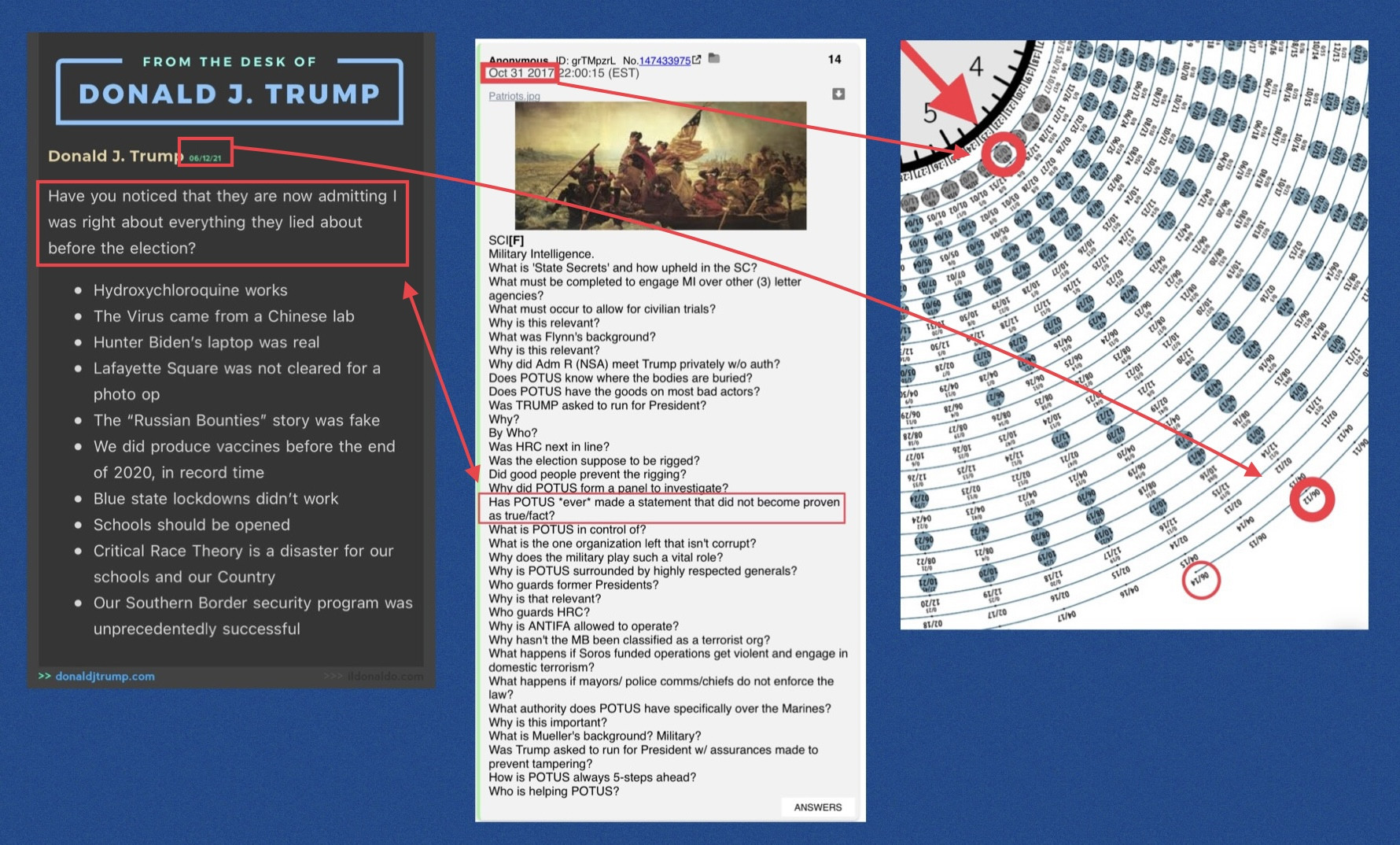 Here is the full statement from President Trump. Love it. 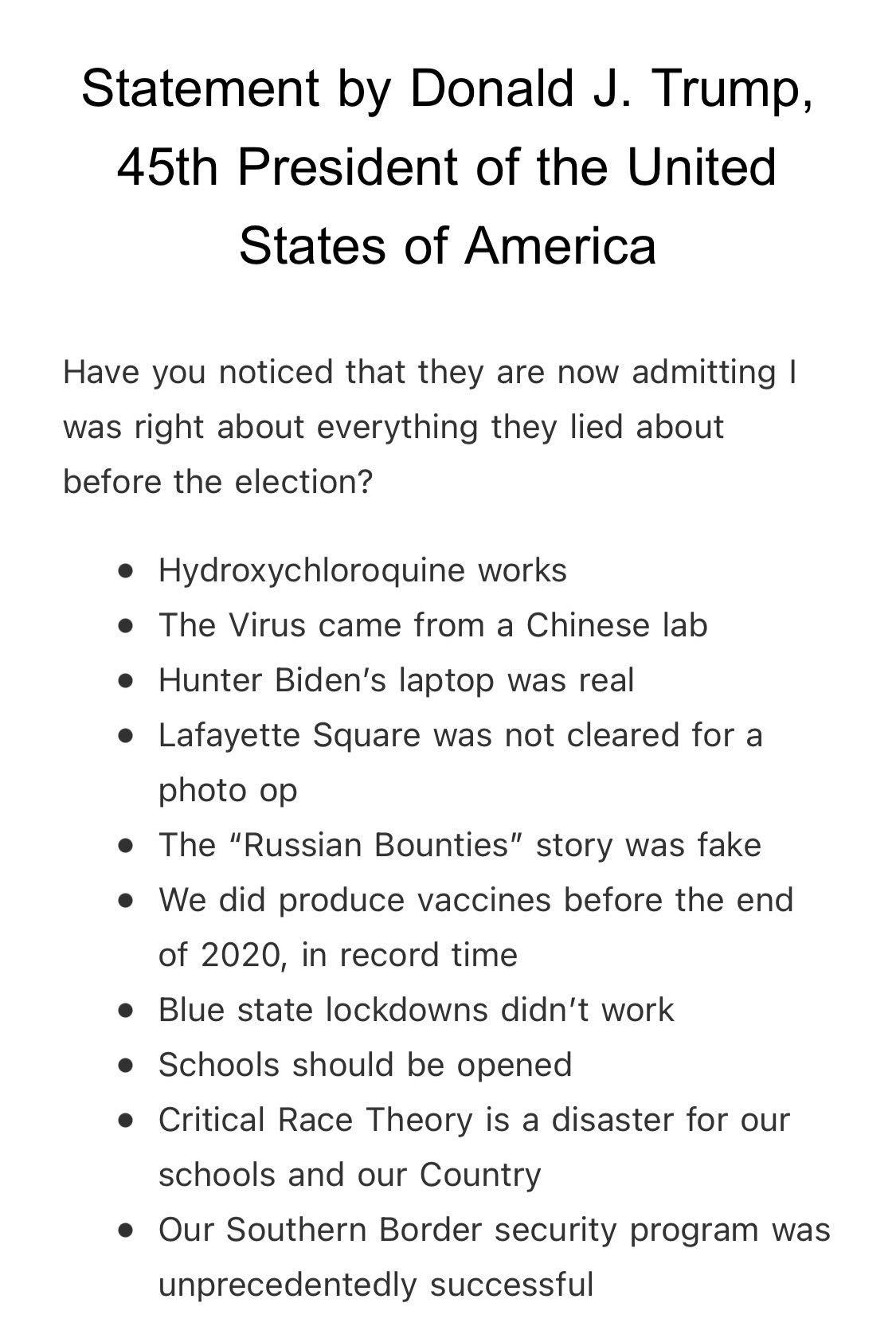 Another President Trump/Cue connection from the last two days. 'It's going to be BIBLICAL.'
https://www.rumormillnews.com/cgi-bin/forum.cgi?read=174558
(Q) The Storm Rider with two tweets about underground fires/explosions in Indianapolis because of the destruction of DUMBS. The first tweet said to EXPECT the fires - the second tweet gives photographic evidence of the fires. BOOM.
https://twitter.com/Littleb29872980/status/1403806504713609218
https://twitter.com/Littleb29872980/status/1403855027018534915
I don't know who (Q) The Storm Rider is, but he/she KNOWS STUFF. Check out this tweet about underground tunnels 400 miles below the Earth surface, and the reference to Antarctica. Please read my previous post about Antarctica for further information on this fascinating subject.
https://twitter.com/Littleb29872980/status/1403865790932213761
Pressure is mounting on [C]hina.... 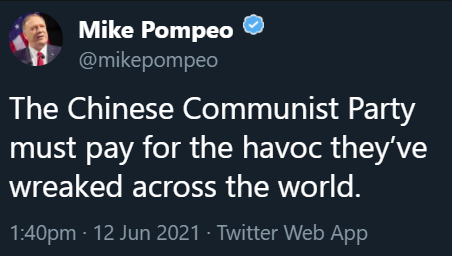 President Trump spoke via video at a rally in Wisconsin. Here is his speech on Rumble.
https://rumble.com/vig6o1-president-donald-trump-speaks-at-maga-frank-rally-in-new-richmond-wi-61221.html
Relentless Truth with another excellent post.
https://gab.com/Lebronsonroids
I almost don't like using this comparison because it's been used against Trump so often, but people need to understand that Joe Biden is a modern day Hitler.Hitler was also a puppet being dangled by the strings of his masters who hide in the shadows.When the Nazis were defeated, they didn't just disappear.They dusted themselves off, regrouped, rebranded themselves, made another plan and began infiltrating the United States from within.Joe Biden is their new puppet and he's just as racist as Hitler was.He just happens to be mentally incompetent instead of heavily addicted to drugs.Hitler led to Nuremberg. Joe will lead to version 2.0
Finally, I like this excerpt from Starship Earth's latest newsletter. I recommend subscribing to this excellent newsletter - it is my daily fix for great intel and superb writing by BP.
http://www.starshipearththebigpicture.com/
We have been assured that the Earth Alliance has access to the future, can shift timelines, and knows how the deep state psychopaths will respond so they can always be trumped.

Trump has already told us we've won. He visited the future and delivered an update. He said he caught the swamp, he caught them all, and no one could have done it but him. It's that simple. It's a done deal. As I said, now we're just mopping up and tying up loose ends. The heavy lifting has been done. It's mostly about "the Great Awakening" now and our journey. Our escape.

It's no coincidence that one of Cue's favorite expressions is 'Future proves the past'. When you consider that the Alliance has had access to Project Looking Glass - time travel - everything makes sense. Project Looking Glass whistle-blowers have said that this is a chess games between two Masters, Good and Evil. Good has already won - all Evil can do is delay the inevitable end. And the timeline for delays is now up.
Thank you for reading this post. You are welcome to share it as long as you re-post it in its entirety, including the link to my blog site.
Where We Go One We Go All.
Love and Light