'It's Fun Being A Nutbar'

BP from Starship Earth can always be relied on to have pithy comments about these crazy times.

http://www.starshipearththebigpicture.com/2021/07/11/your-sunday-digest-for-july-11-2021-coming-out-of-the-woods-videos/
There's no question, this "movie" is unprecedented and fascinating to watch. To a large degree, completely absurd. I can only imagine what sentient Beings watching this Earthly train wreck think of it...Sometimes it's fun being a "nutbar". We can snicker and hide our sly smiles because we know the others are going to have to wake up one day soon. In the interim, we have our private jokes and exclusive club---all the while knowing we're truly one. (BP from Starship Earth)
Scroll down the Starship Earth newsletter link for the picture of the house that was neatly cut in half by a 'wild fire' and managed to retain its green landscaping. It is a very obvious example of DEW (directed energy weapon). I once travelled through a big area of Australia several months after a huge bushfire. Believe me, there was NO greenery left. Not a single leaf. And the houses were completely burned.
These excerpts from Daniel Scranton's latest Arcturian channelling are uplifting for Light Warriors...
https://danielscranton.com/
You are a big enough group to make a difference there on Earth and to bring so many more people with you on a positive timeline, one that includes baby steps forward, without cataclysms, without massive numbers of deaths.
There are so many different ways that people are not taking responsibility for their own creations, and those of you who do are not going to wake them up with your words. You are not going to wake them up by telling them something that they have known but have forgotten.
Isn't that a fascinating way to look at the 'sleepers'? They are not taking responsibility for their own creations. They KNOW the truth at a soul level but they have succumbed to the MSM propaganda. Remember, for the most part it is scripted, part of their role play. However, many souls may have forgotten their contract to 'wake up'. We can only continue to lead by example, refusing to be bullied into giving up our sovereign rights as a free human being on Earth.
My friend Jim in St Paul Minnesota reported that ten huge military planes flew over his property yesterday. This is a highly unusual event - many such reports are coming in throughout USA.
Fijians are fighting back against the jab narrative. Their national rugby team (it's a BIG game in Fiji) was ordered to wear jerseys emblazoned with the words, 'Vaccinate every Fijian'. They refused. Good on them.
The UK is potentially heading towards the herd immunity option. All it will take is ONE big country to implement this option and the rest of the world will follow. The craziness ends.
Tarot by Janine shared a Wayne Dwyer quote in a recent video. It is most appropriate for the times we are in.
'In the case of all evidence to the contrary, think about the situation as if it's ALREADY the way you want it to be, not the way you are fearing it is.' (Wayne Dwyer)
Finally, this meme says it all. 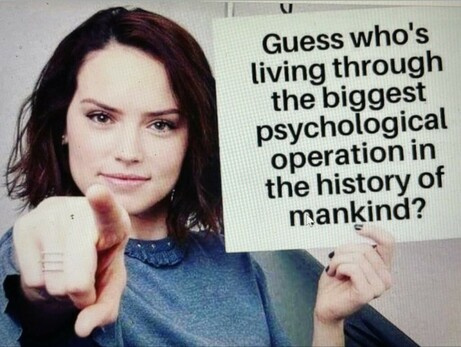 Hold the line, World Patriots. The [D]eep [S]tate is cowering in the corner now. WE are in charge.
WE'VE GOT THIS.
Thank you for reading this post. You are welcome to share it as long as you re-post it in its entirety, including the link to my blog site.
Where We Go One We Go All.
Love and Light