July 07, 2021
Major Patriot sums it up best...
https://gab.com/MajorPatriot
Haitian President gets whackedCauses Clintons to trend on TwitterTrump sues Google, Twitter & FacebookPennsylvania goes Full Forensic AuditSurvey says over half of population think someone else is running the countryJoe Biden failed July 4th vaccine target-goal so bad he's sending out storm troopers with syringes to every American doorDeep State's having a bad week
Third item on that list is HUGE news. President Trump is suing Google, Twitter and Facebook in a CLASS ACTION LAWSUIT. It means he is suing those evil Big Tech companies on behalf of a broader group of people who have also been severely censored by their policies. That's us!
The assassination of the Haitian President and his wife is being linked to both the [C]lintons and Bill [G]ates and his murderous vaccine programs. Remember the Tanzanian President was assassinated after using PCR tests on goat meat and fruit and getting positive results.
Blue Sky on Gab with details of the Haitian assassination.
https://gab.com/QBlueSky
Haiti President Jovenel Moïse assassinated by 'highly trained and heavily armed group'Haiti’s U.S. embassy says the attack was well coordinated by a highly-trained and heavily armed group. Assassins spoke Spanish and English with an American accent-AKA - C

AHaiti was one of few countries who said no to lockdowns, vaccines & the Covid-19 agenda, We all know, all of the presidents who made the same decisions regarding going against the narrative have been / were found dead. Tanzania, Burundi, Republic of Congo, etc.Haiti remains the only country in the Western Hemisphere and one of five globally where the government has yet to administer any vaccines.
The [D]eep [S]tate's desperation is showing. Creepy Joe with his latest attempt to reach 'the vaccine-hesitant'. 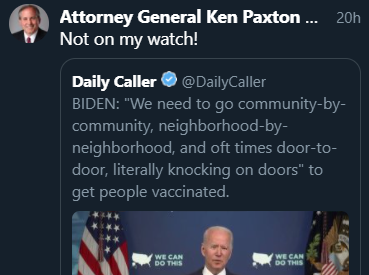 Marjorie Taylor Greene shoots down [B]iden's door-to-door strategy in full Light Warrior style. Love her.
https://rumble.com/vjjhl1-marjorie-taylor-greene-stay-away-from-our-doors-with-your-non-fda-approved-.html
Finally, Stew Peters is presenting superb truth journalism videos about the jab. This quote by him could sum up the entire Scamdemic. 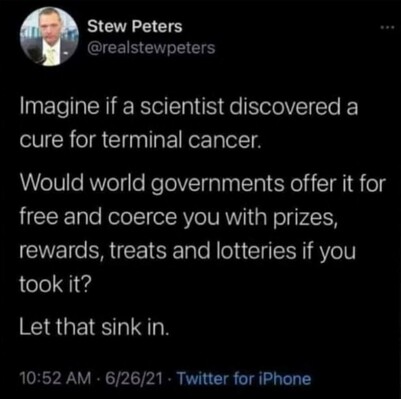 An important reminder - no planet's population has EVER ascended to higher dimensions in their physical bodies. This grand experiment has never been attempted before in this multiverse. It's a massively bold undertaking. Are we watching from the cheap seats...?? No, we are PARTICIPATING.
We are powerful Light Warriors, the bravest of the brave and the strongest of the strong. Many applied to be here, only a few were chosen. Be proud.
Thank you for reading this post. You are welcome to share it as long as you re-post it in its entirety, including the link to my blog site.
Where We Go One We Go All.
Love and Light