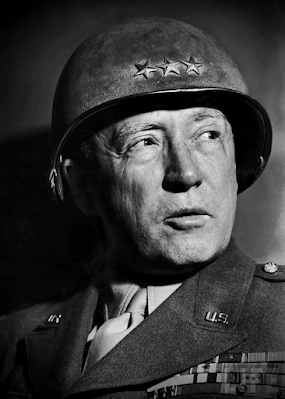 I have just watched a video from Tarot by Janine where she talks about President Trump possibly being adopted and might be the son of General Patton - conceived during an affair Patton was having just before his death.

I pride myself on recognizing the resemblance of people. I thought, 'As soon as I see a picture of General Patton, I will know...' Well, there is the pic. I don't know about you, but I see a strong resemblance to President Trump.

It is also being discussed that President Trump could be the reincarnation of General Patton. Both suggestions are pure speculation - it's fun to speculate if you don't take it too seriously.

It really doesn't matter how President Trump arrived on the earth plane. The important thing is that he is here and doing a magnificent job on an extraordinarily difficult mission.

I will end with these two points...

And guess how many cannon volleys were fired at General Patton's funeral? Seventeen.

Thank you for reading this post. You are welcome to share it as long as you re-post it in its entirety, including the link to my blog site.

Where We Go One We Go All.