August 14, 2021
Here is proof that the [D]eep [S]tate is in complete panic. The Department of Homeland Security has released their latest list of potential terror threats. Guess what? We Light Warriors are top billing. Amusing? Maybe. Potentially dangerous. Also maybe. Relentless Truth on Gab with his take on this situation. https://gab.com/Lebronsonroids
Are you connecting the dots?
We are being set up for a false flag attack. Potentially a massive one. [They] are losing control of the narrative.1. We are coming up on the 20th anniversary of 9/11.2. The Taliban is currently taking control of Afghanistan.3. Anybody who opposes Covid measures or questions the election has just been labeled a terrorist threat (in light of the 9/11 anniversary).4. The media is pushing stories about Q supporters feeling "angry and letdown" because Trump hasn't been reinstated. (I.E Fake news just a few days ago about a father who killed his children because Q said they could have serpent DNA).5. The head of the CIA just met with the head of MOSSAD (Two of the main players in the 9/11 attacks).6. Biden's Covid czar recently hinted at something major happening just prior to 9/11 anniversary.Maybe I'm wrong. Maybe I'm not.There's certainly a lot of smoke...HEAD ON A SWIVEL.SEE SOMETHING SAY SOMETHING.
This video gives excellent scientific data about the outcomes for jabbed people versus un-jabbed when it comes to the fake virus. The jab is only 16% effective after six months - hence the need for constant 'booster' shots. This is compelling evidence that even the most sceptical sleeper would be forced to consider.
https://www.rumormillnews.com/cgi-bin/forum.cgi?read=179630
Follow the money. Who profits from wars and pandemics..? The already filthy rich, that's who.
Judge Jeanine with some harsh truths about the Scamdemic profiteers.

When the pandemic began there was 1 person worth $100 billion

When the pandemic began the 10 richest people had $695 billion

While people struggle to put food on the table amid the pandemic, billionaires are getting richer.

The day when people realize this is a business, it'll be too late. Wake up, people. Let’s save our world

Well, well - Creepy Joe's wife Jill is wearing an ankle-monitor-disguising moon boot. It seems only yesterday that Joe was wearing his own. Those ankle-monitors are clearly high infectious. And if anyone believes that you wear a moon boot after a 'puncture' wound...give me strength.
https://apnews.com/article/2020-tokyo-olympics-sports-joe-biden-health-hawaii-51a60bd0eb961d204e7373eeeec8b275
It's the weekend and the French people have taken to the streets again in protest all over the country. This is Paris - that crowd is HUGE. Be inspired by their zeal for truth.
https://gab.com/TommyRobinsonOfficial/posts/106754600196719202
Finally, I love this meme. If common sense was the rule of law at present, this conversation makes TOTAL sense.
George Balloutine on Gab https://gab.com/Zeus6266 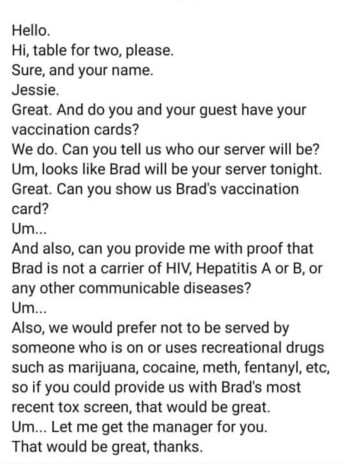 When the irony of that meme is clear to most people on this planet, we will have clear evidence of victory. Until then, we keep forging on, moment by moment. We Light Warriors know that we have TRUTH on our side. And truth ALWAYS wins in the end.
I will close with a favorite quote from one of my favorite movies 'The Best Exotic Marigold Hotel'. Sonny says to a disgruntled guest...'Everything will be alright in the end. If it is not alright, it is not the end.'
As my dear friend Donna said today: 'The world is crazy - but WE ARE NOT'.
Thank you for reading this post. You are welcome to share it as long as you re-post it in its entirety, including the link to my blog site.
Where We Go One We Go All.
Love and Light
Sierra