Protests Down Under: Go Aussies!

September 18, 2021
This awesome video of a huge West Australian protest gave me goosebumps. Love our WA friends. I lived in Perth for a year in 1979 and I have a beloved nephew currently living there.
https://gab.com/PepeLivesMatter17/posts/106953796192603254
There was a big protest in Brisbane. Will the MSM cover these rallies? You know the answer. Back in the 80's when I worked as an MSM journalist, these extraordinary protests would have been front page news.
https://gab.com/PepeLivesMatter17/posts/106950965341289791
Florence Italy held a huge protest too. Beautiful city. We the People are silent NO MORE.
https://gab.com/PepeLivesMatter17/posts/106955359115606802
This little video shows a BIG police presence at the Capitol today. Anons are saying that President Trump was spotted at the White House yesterday. It seems that the [D]eep [S]tate dike is about to burst. Bring it on...!
https://twitter.com/Americanka4/status/1439227514522640385
Starship Earth published these tweets that suggest the DS has surrendered to President Trump.

THE CABAL MAKES A SURRENDER DEAL

Why do you think the White Hats telegraphed that the AZ Audit results will be released next Friday, September 24th? Wouldn't that be an invitation to the Cabal to plan FF's for then? The date is firmly stated because the Cabal has made a

This interesting Cue proof from Dan Scavino seems to confirm that President Trump will step out of the shadows very soon. Dark to Light.
https://gab.com/PepeLivesMatter17/posts/106953437955824215
The media is finally waking up to [B]iden's corruption. A news outlet is filing a lawsuit for prevention of news coverage of the Haitian border invasion.
https://summit.news/2021/09/17/media-outlet-files-lawsuit-to-challenge-faa-ban-on-drone-footage-at-texas-border/
Wow. This 1994 Denver airport mural depicts the Scamdemic. Look at all the countries represented in the mask wearers. Pure evil. There is a huge DS base underneath the Denver Airport terminal.
https://gab.com/QAnon211 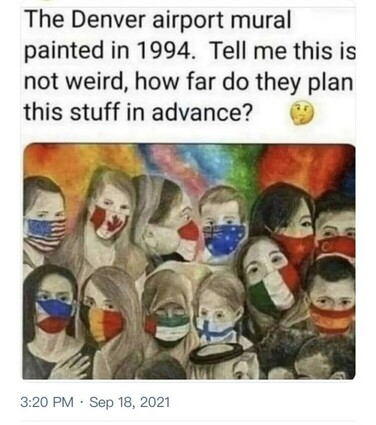 Finally, Joe M(Storm Is Upon Us) has a stirring message for World Patriots.
Congratulations America. You have become more aware than ever of daily incidents in every town, city and state across the Union where an enemy-infested local, state or federal government is actively attacking our freedoms and way of life.You have been awakened to the scale of this infiltration, where it came from, and what its end goal is.Once operating freely in the shadows as we consumed TV dinners in front of back-to-back episodes of Friends, now the enemy slithers in plain view, completely exposed in the dazzling glow of a thousand points of light.Fellow citizens, with your focus and attention on what these traitors are doing each day around the country, and by raising your voice wherever it may touch ears, you are actively participating in a new Revolutionary war effort presently underway to overthrow a hideous, transnational, multigenerational cartel of death that has been paralyzing our world with its scorpion sting of cultural Marxism for over a century.You are going to win because you have a force behind you of a hundred million angry patriots who just woke up and remembered how much they loved Old Glory.
Last night I helped a teenage boy sort out a difficulty at a self-serve petrol station. He had only had his car licence for two days. We called the company who told us what to do. I poured the petrol for him. We both cheered. Then he looked at me, this sweet kid, and said: 'Can I give you a hug..?' Imagine if I had been wearing a mask. Would he have asked? Hugs are humanity. Keep hugging EVERYONE.
Thank you for reading this post. You are welcome to share it as long as you re-post it in its entirety, including the link to my blog site.
Where We Go One We Go All.
Love and Light
Sierra