September 03, 2021
The NZ Herald published a long article about President Trump's imminent announcement of running in 2024 (it will be this year). Scroll down for the short video of Senator Jim Jordan sharing the news with supporters.
https://www.nzherald.co.nz/world/donald-trump-reportedly-planning-to-announce-2024-presidential-run-any-day-now/LXRFU3WROWMIX4MG7DC6GA62CQ/
Speaking of the Herald, here are today's fear-mongering headlines: 'Terror in New Lynn: How NZ faces down terrorism'. 'Six terror attack victims still in hospital.'
What happened? A mind-controlled man who had been followed by police 24/7 for FIVE YEARS ran amok in a supermarket. Even though police officers were right behind him, he managed to randomly grab a knife from a shelf (convenient) and stab and critically injure six people before police shot him. Smell a set-up? Me too.
An interesting headline: 'UK Governor's plan for Queen's death finally revealed.' Could we finally see the announcement of Queenie's death (distraction from Afghanistan), long after her actual demise?
Steve Bannon on War Room gives a shout out to Cue. Awesome. He's talking about the shocking fact that HALF of unaccompanied migrant children who crossed the border are missing.
https://gab.com/MajorPatriot/posts/106869250644616105
Joe Rogan got [C]ovid, threw all alternative therapies at it and was fully recovered in three days. He re-tested and got a negative result. Pass it on. NO NEED FOR THE JAB.
https://gab.com/SomeBitchIKnow/posts/106858470014946815
This short video by a professional painter should be required viewing for all muzzled people.
https://twitter.com/matthewloop/status/1433429786404163591
Great news. It seems that the Aussie truckie blockade is happening. ALL coverage was blocked. The [D]eep [S]tate must be very scared.
https://welovetrump.com/2021/09/02/australia-truckie-protest-update-road-closures-across-the-country-entrances-to-sydney-blocked/
The Alliance plan is working - [B]iden's approval rating is plummeting.
https://gab.com/MajorPatriot/posts/106868098860712093
Sidney Powell, all guns blazing, shares her thoughts on [B]iden and [H]arris. 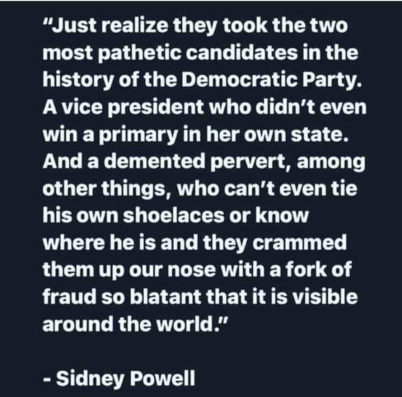 Finally, a heart-warming meme from a Light Warrior parent and daughter team. Love it A close Light Warrior friend sent me some very disturbing intel just now about what is being planned here in NZ by the government and 'authorities'. It was chilling to read. We discussed it in a phone call. Afterwards I thought, 'What can I do...?' The answer is clear: I keep doing what I am doing. I keep writing this blog to inform, inspire and encourage Light Warriors to KEEP FIGHTING BACK.
Thank you for reading this post. You are welcome to share it as long as you re-post it in its entirety, including the link to my blog site.
Where We Go One We Go All.
Love and Light
Sierra