September 16, 2021
This post opens with testimony from one of the bravest young women you'll ever see.
McKayla Maroney was a long-time child victim of pedophile USA Gymnastics coach Larry Nassar. This video is heart-wrenching. Note the lady sitting behind McKayla who sheds tears throughout. Please ensure that McKayla didn't tell her story in vain, unlike when she told the FBI. Help to make her video go viral.
https://gab.com/SonOfEnos/posts/106937804329528145
Highly influential young rapper Nicki Minaj has taken the red-pill about the jab and is urging her 22 million followers to join her. This young woman could single-handedly change the narrative. Unfortunately she did admit in a tweet that she might be forced to take the jab to go on tour.
https://gab.com/PepeLivesMatter17/posts/106938926270195260
I wonder if the anniversary of the first Cue drop is the day of the Big Reveal? 28th October 2017. Durham was sworn in as interim Attorney General by President Trump on the same day. It would make sense of the Cue drops about Red October.
https://gab.com/PepeLivesMatter17/posts/106944232371862729
Durham is underway. He's starting with the small fry but the big [D]eep [S]tate players will be in terror.
https://gab.com/techno_fog/posts/106938527568652210
Riccardo Bosi, leader of Australia One, gives a warning of what lies ahead - and the extent of treason among those in authority in Australia. I will add - ditto for New Zealand. A must-watch two-minute video.
https://gab.com/PepeLivesMatter17/posts/106944136031573301
Further evidence of [B]iden's corrupt administration - 6000 (un-jabbed) illegal migrants cross the border.
https://gab.com/MajorPatriot/posts/106942053214468104
What keeps the sleepers asleep? Check out this NZ Herald article. Even though it is FULL of lies, most NZers will believe every word of it. It's very disturbing, especially when those sleepers are our family members and friends.
https://www.nzherald.co.nz/nz/covid-19-delta-outbreak-the-90-project-why-nzs-vaccination-drive-must-shoot-for-the-moon/IKIQQ5DFKD4XB34H2FQ7I7GIUI/
Finally, this great meme debunks the over-population myth (and excuse for DS agenda)...
https://gab.com/BeachMilk 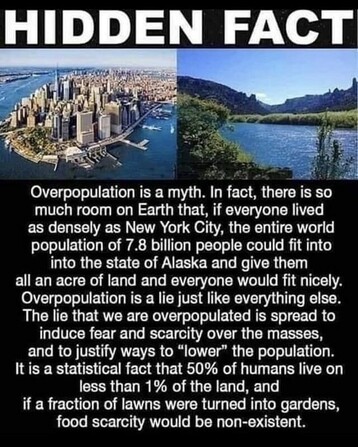 Today I was feeling a little weary - until I watched John O'Looney's video (see previous post). Instantly I was galvanized and inspired to write the post dedicated to his video. I believe we Light Warriors should find the strength and courage to stand behind this man and give him all our support.
Decades ago, Dolores Cannon spoke of the split between 'the old Earth' and 'the New Earth'. That split is taking place right now in homes, families and friendships all over the world. Light Warriors, we are here to hold the Light for humanity during this challenging time. That's our mission. And we are doing a fine job of it.
WE'VE GOT THIS.
Thank you for reading this post. You are welcome to share it as long as you re-post it in its entirety, including the link to my blog site.
Where We Go One We Go All.
Love and Light
Sierra