We The People Are WINNING

September 08, 2021
From now on every post will lead with stories about how We The People are WINNING.
Los Angeles police and firefighters have united to form a resistance group against jab mandates - it's called Firefighters 4 Freedom.
'Our goal is to stop the mandated vaccinations for all City employees as well as the citizens of this great country...This is a human rights issue.'
https://summit.news/2021/09/07/police-firefighters-in-la-form-group-to-resist-vaccine-mandates/
Love this video of school children asserting their right to go to school without a mask. FIGHT BACK.
https://gab.com/PepeLivesMatter17/posts/106897649955894967
Clear evidence of election fraud in Arizona. The grassroots canvassing result is out - nearly 300,000 fraudulent votes. BOOM.
https://gab.com/ilDonaldoTrumpo/posts/106898947856397131
[B]iden is clearly a puppet, fully controlled by the Alliance. Check out the blatant lying in this video.
https://gab.com/PepeLivesMatter17/posts/106897100743685067
It's not surprising that [B]iden's approval rating is plummeting so rapidly. This week it is down to 39%, a loss of six points in just one week. And his disapproval rating is 49%, up four points in the same timeframe. Dead man running.
A story that proves it has never been about the virus - The DS agenda is full domination of humanity.
https://summit.news/2021/09/07/rutgers-uni-student-banned-from-taking-online-virtual-classes-because-hes-unvaccinated/
The WHO is promoting the arrival of a 'brain destroying' virus in India that has a fatality rate of 75%. It is the bat-borne virus that inspired the movie 'Contagion'. WAKE UP, PEOPLE...!!!
https://summit.news/2021/09/07/report-different-pandemic-potential-brain-destroying-virus-with-75-death-rate-spreading-in-india/
This seven-minute video features a NZ doctor explaining the jab to a teenager. It is common sense information that cannot be refuted in any way. If someone is contemplating the jab, tell them: 'You would be taking part in a clinical trial that doesn't end until 2023. There is no way of knowing the long-term side effects.' That's it.
https://rumble.com/vkmd0b-nz-teen-chats-with-dr-anne-about-covid-jabs-in-schools.html
Finally, a lovely story about a Mum who turned lemons into lemonade. This is how We The People walk away from the corrupt elite institutions and create the beautiful New 5D Earth. https://gab.com/PepeLivesMatter17 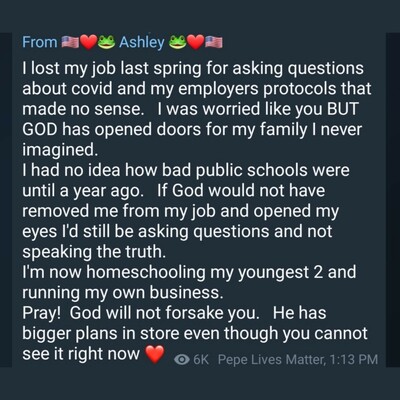 Prayers for Australia. I hope that groups like New Zealand's Voices For Freedom, and the Los Angeles Firefighters 4 Freedom will find their way into the Aussie psyche. It is vital that we FIGHT BACK. Australia is the [D]eep [S]tate template for how the whole world could be if we all sit back and do nothing.
Hold the line, Light Warriors and World Patriots. WE'VE GOT THIS.
Thank you for reading this post. You are welcome to share it as long as you re-post it in its entirety, including the link to my blog site.
Where We Go One We Go All.
Love and Light
Sierra