NO ONE Escapes The Pain

October 06, 2021
This post opens with a comment from blog-reader Sarah. She is absolutely right - Cue said that NO ONE escapes the pain, even the minions who sold their soul to the devil in exchange for flashy clothes and overseas holidays.
The Pfizer "scientist" clearly said it: "I signed a NDA for this."All the employees of the corrupt corporations must have done just that in fear of losing their jobs and worse. Anyone with a conscience would not accept that, whatever the cost.
This ten minute video features powerful testimony from a molecular biologist about the jab. She says, 'If we truly had a pandemic, you wouldn't have to convince people to take it...I have seen the results of people who have taken it and I didn't know whether to cry or scream, I have never seen anything like it...'
https://gab.com/BeachMilk/posts/107053957308534769
President Trump's latest message may be a signal that he is getting ready to finally play the Trump Card. Please...!
Looks like Mitch McConnell is folding to the Democrats again. He's got all of the cards with the debt ceiling, it's time to play the hand. Don't let them destroy our country! (President Trump)
The media tide is turning. [D]eep [S]tate CNN broadcast damning poll results for [B]iden. Over 50% of Americans believe that [B]iden's administration is 'incompetent'. [B]iden's personal rating has slumped to 39%.
https://gab.com/QAnon211/posts/107056744831801910
The latest horror story from Australia - they seem to escalate daily on the incredulity scale. What I found scary about this video was not just the mandate itself but that the TV reporter called it 'OUR program...' Media complicit, much.
https://summit.news/2021/10/06/video-australians-being-mandated-to-provide-police-with-geo-trackable-selfies-to-prove-theyre-quarantining/
We knew it was coming - Google is being ordered by the government to track American searches on Google. At what point do the sleepers finally realize that they are living in a totalitarian world..?
https://summit.news/2021/10/06/report-google-ordered-by-government-to-track-americans-searches/
Excellent news - UK football stars are joining their USA NBA colleagues and not getting jabbed. Over HALF the premier English Football League players are not jabbed.
https://summit.news/2021/10/06/majority-of-english-football-league-players-not-fully-vaccinated/
Republican Senator Lindsey Graham was jeered by his own supporters for urging them to get jabbed. Love it.
https://twitter.com/TrumpJew2/status/1445563362046144512
A reminder that we are watching a movie. Re-stock the popcorn for the thrilling end to this blockbuster.
https://gab.com/QAnon211/posts/107055771900262557
We must never underestimate the sheer desperation of the [D]eep [S]tate. They already know they have lost the war but they are determined to drag as many of us down with them as possible. WE WILL PREVAIL. 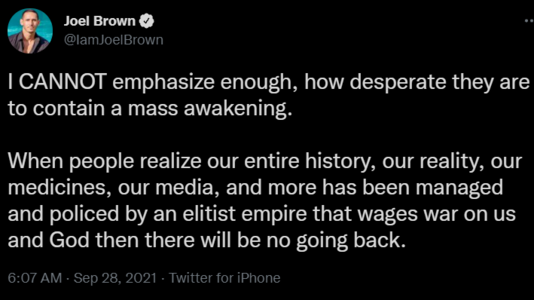 Finally, a true Light Warrior hero willing to give up everything for freedom (one minute video).
https://gab.com/BeachMilk/posts/107054393123408038
My local Voices For Freedom group met last night at my place. Here are the main themes that we discussed: The fact that we will NEVER get used to seeing masked people when we go out...The daily emotional rollercoaster ride that we Light Warriors are all on right now...The need to decide for ourselves what is right and wrong for us (self-determination) in any given situation...and the need to stay fluid in our beliefs and actions from day to day. So much is changing so fast.
Mostly we were very grateful for our little band of freedom warriors. We don't take for granted the opportunity to gather once a week and laugh and cry over our experiences since we last met. There is always a lot of laughter and sometimes the release of stressful tears in a compassionate setting.
WE'VE GOT THIS.
Thank you for reading this post. You are welcome to share it as long as you re-post it in its entirety, including the link to my blog site.
Where We Go One We Go All.
Love and Light
Sierra