A great meme about the Premier's resignation. It shows how swiftly the Alliance can move - and how they force the besieged DS criminals to play their role right to the end. Literally the day before their resignation. The Alliance is in FULL control. 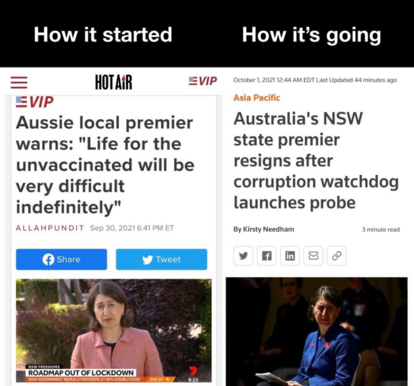 Brazilian President Bolsonaro talks about the slippery slope from jab passports to population control. Remember the BRICS nations are supporting the Alliance - Brazil, Russia, India, China and South Africa (NOT the Chinese Communist Party). That's why some Indian states are having almost a 100% virus cure rate with Ivermectin.
https://gab.com/disclosetv/posts/107027423577108825
Bravo to this Light Warrior Toronto restaurant owner who refuses to discriminate with his customers. He has the Canadian Bill of Rights taped to his front windows. This is awesome role-modelling.
https://gab.com/PepeLivesMatter17/posts/107027832813062426

[G]ates is making a move on his synthetic meat program. You know WHY he is buying up huge tracts of USA Mid-west land..? To get rid of the crops and cattle. REAL food grown by farmers. When the world is only eating his synthetic meat, he can turn off the switch any time. Mass starvation. NOT happening. Anyway [G]ates is already dead - but the narrative plays on... 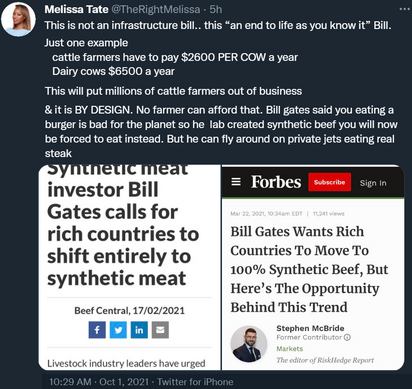 A cool meme from Dan Scavino. Welcome to RED OCTOBER. 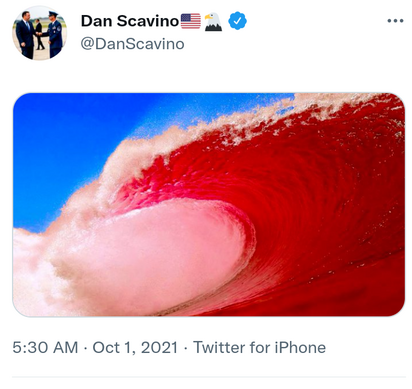 This story features a picture of the White House lit up RED in early hours of 1st October. Love it.
https://www.rumormillnews.com/cgi-bin/forum.cgi?read=183738
Finally, I did some more shopping today in the mall and big department store. I wish I could say that I was stocking up my pantry but it's the wardrobe that was seeing some serious action! YET again, among hundreds of people, I was the ONLY unmasked person. It's surreal. Every. Single. Time.
I was asked by an older staff member in a shop if I had the jab. I said, 'No way. It's dangerous, I would never have it. Why do you ask?' Weirdly, she said that I looked like a nurse (I was wearing a white tee shirt). I explained to her that thousands are now dying of the jab overseas. I said that it's deadly and don't take it whatever you do.
Yesterday I did some Mask Angel work, delivering laminated mask exemption tags to volunteers at a local charity shop. The women (elderly) were so grateful, they were in tears. I was supposed to drop off six tags but ending up leaving twelve. I made sure that all eight Tongan orchard workers in the hostel where I clean were given tags. Tongans are some of the happiest people in the world - you should have seen their smiles.
WE'VE GOT THIS.
Thank you for reading this post. You are welcome to share it as long as you re-post it in its entirety, including the link to my blog site.
Where We Go One We Go All.
Love and Light
Sierra