Bannon: 'They Took On The Wrong Guy' 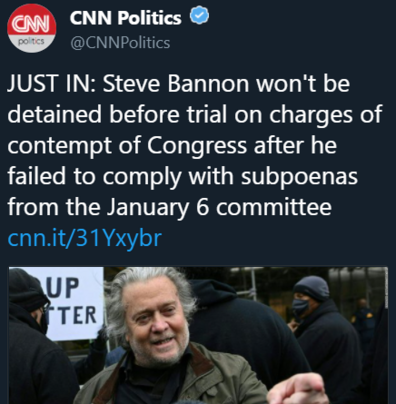 A Holocaust survivor speaks about how the Nazis demonized the Jews as 'spreaders of disease' (26" video)
https://gab.com/QAnon211/posts/107283449945388349
That took place in the 1940's. This little video from Austria is 2021. Chilling. Remember Hitler was Austrian.
https://gab.com/QAnon211/posts/107283004489885350
This young guy pulls no punches in his attitude towards people who comply with the BS.
https://gab.com/QAnon211/posts/107282619349425983
The family of a man who died after the jab PRAISES it and urges people to get it. Mind-controlled to the max.
https://gab.com/BeachMilk/posts/107280485445319825
As per this news story, I have noticed the trend here in New Zealand - mainstream media is describing deaths as 'sudden' or 'unexpected' with no further explanation Translation: Jabbed death. Or, sadly, suicide.
https://www.rumormillnews.com/cgi-bin/forum.cgi?read=187052
How much inhumanity must the world witness and endure before a universal cry rises up: ENOUGH! A father is not allowed to be with his two year old daughter in hospital after she was injured in a car accident. Why? He is not double-jabbed. ENOUGH!
https://gab.com/BeachMilk/posts/107281267604098978
A Catholic brother believes the only solution to the [D]eep [S]tate stranglehold is to arrest the bad guys. Indeed.
https://gab.com/musicwarrior/posts/107277815121070672
Finally, BP from Starship Earth can always be relied on to share little gems of wisdom.
http://www.starshipearththebigpicture.com/
I keep seeing a heart locked up in a glass box on a wall like the fire alarm switch and we are having to grab that axe and break the glass to get through to the collective heart of Humanity to sound the alarm, to get them to feel again; to dispel the thick dross that is keeping us apathetic and insensitive about the horrors unfolding on our planet and the suffering of our fellow man.
'Apathetic and insensitive' to the horrors around us - that is the murderous legacy of the [D]eep [S]tate mainstream media. President Trump has always said, 'They are the enemy of the people'. Absolutely right. Even the sweetest people, like some of my lovely elderly neighbors, are totally brain-washed via their 24/7 consumption of the MSM lies.
However, we Light Warriors know that numbers are growing exponentially on the side of TRUTH. The Light is WINNING bigly.
WE'VE GOT THIS.
Thank you for reading this post. You are welcome to share it as long as you re-post it in its entirety, including the link to my blog site.
Where We Go One We Go All.
Love and Light
Sierra