November 19, 2021
Starship Earth has produced such an informative newsletter today, I encourage you to read it. So many interesting subjects.
Scroll down to these links in particular...Pure semen from un-jabbed men...[B]iden's brief absence...Canada floods...Phil Godlewski links (including Flat Earth)...Kyle Rittenhouse acquitted of all charges.
http://www.starshipearththebigpicture.com/2021/11/19/november-19-2021-lord-of-the-three-ring-circus-videos/
Awesome news about Kyle Rittenhouse's acquittal on all charges. It is a massive loss to the [D]eep [S]tate. PANIC incoming. Keep situational awareness because there will be an attempt at [S]oros funded rioting.
https://gab.com/MarkDice/posts/107305376212288329
Check this little video - watch Kyle's reaction when the Not Guilty verdict is read out. Tears of relief for this brave Light Warrior boy. He has been through a hell that would have challenged most grown men.
https://gab.com/PepeLivesMatter17/posts/107306071388384734
Don't forget [B]iden tweeted that Kyle was a 'white supremacist'. Karma is a boomerang that travels mighty fast these days.
https://gab.com/gatewaypundit/posts/107305231755701266
An official statement from President Trump about playing the Trump Card. BOOM.
https://gab.com/realdonaldtrump/posts/107304413927438196
Back when I had leisure time to watch videos, I was a big fan of Dave's X22 Reports. I intend to make time to watch his latest video about the Trump Card.
https://www.bitchute.com/video/LS0WPWPEz1D3/
An anonymous natural health doctor has researched the jab and discovered that the effect replicates AIDS.
https://www.naturalnews.com/2021-11-19-natural-doctor-blows-whistle-on-covid-vaccines.html
With each vaccination, the saline ratio of the vaccine is decreased and the toxic ingredients are increased. That's a 75% loss of white blood cell count, and this is before any booster shots. (Natural health doctor)
Tennessee is banning jab passports. That is excellent news for several of my blog reader friends.
https://gab.com/QAnon211/posts/107303869420578494
This short video explains the absolute nonsense of the jab passports - and it is based on UK government information.
https://gab.com/PrisonPlanet/posts/107305687873514310
A quote from Relentless Truth about Kyle's acquittal...
https://gab.com/Lebronsonroids
Today wasn't just a victory for Kyle, it was a victory for the country and by extension the rest of the world who depend on us as a beacon of freedom.CONSTITUTIONAL LAW & ORDER REIGNS SUPREME.GOD BLESS AMERICA

...And a quote from Qstradamus. https://gab.com/Qstradamus
Kyle Rittenhouse being innocent on all charges is such a big win for freedom! We've been getting beaten up for so long Patriots.. maybe this is a turn of the tide. Justice will win. Justice will prevail. God had his hand on Rittenhouse. He also has his hands on this country. Justice is the Lord's. Nothing can stop what is coming.. Nothing.
A meme that will gladden the hearts of all Light Warriors. Freedom for Kyle and an incoming WORLD OF PAIN for the MSM via law-suits. 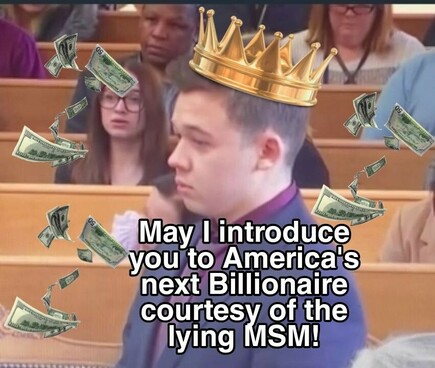 Finally, a joyful singing protest rally in Melbourne that gave me goosebumps. The Aussie people have spoken: 'We're not going to take it anymore...'
https://gab.com/BeachMilk/posts/107303114216200455
I had a great view of the Lunar Eclipse last night. It was a clear night. This morning, it seems that the tide has turned in a BIG way around the world. Kyle Rittenhouse is symbolic of the extraordinary bravery of Light Warriors who fought and fought with all their hearts to liberate humanity.
WE'VE GOT THIS.
Thank you for reading this post. You are welcome to share it as long as you re-post it in its entirety, including the link to my blog site.
Where We Go One We Go All.
Love and Light
Sierra