January 11, 2022
Project Veritas has just released damning military documents that prove without doubt [F]auci lied about his involvement in the Wuhan lab gain-of-function research. This could be the first big marker for the implosion of the [D]eep [S]tate.
https://www.projectveritas.com/news/military-documents-about-gain-of-function-contradict-fauci-testimony-under/
Starship Earth published this theory from a Telegram source about [F]auci being the first big public arrest. It makes sense of the Q phrase: 'THE SHOT HEARD AROUND THE WORLD.'  I agree with the Telegram source: [F]auci is the one person whose arrest would shock awake every jabbed person on the planet. The deadly toxins coursing their bodies are there as a direct result of the actions of ONE man - [F]auci. BOOM.

How does it signal direction?

He is literally the piece that leads to every single corrupt entity we fight against.

Why would it shock the world? This is easy. Because he has been presented as a hero, a God amongst men, the Medical Savior!! Everyone the world over knows who he is by now and he is largely adored by the normies (even if he does throw like a limp wristed bitch

Except most of us know that the dude is actually more akin to Hitler and Pol Pot than he is any kind of “hero”.

Fauci’s arrest would shock every single person who is not red pilled, and it would signal to Anons and the red pilled that the drip is about to become a flood due to all of his nefarious connections with ALL the main players as far back as the 70’s.

This is purely my speculation, and just having a little fun at trying to guess who may be the first one in cuffs, so don’t take this too seriously or hold me to it. (Telegram source)

An interesting newsletter from Ben Fulford. In the past, I have been cautious about his intel - it has been inconsistent at times. However, this newsletter has some credible information, especially about the situation in Eastern Europe/Middle East. Ben backs up the famous Q phrase: 'Saving Israel for last...' As with all intel, please use your discernment to determine if it is YOUR truth.

CDC admits that over 75% of [C]ovid deaths involved at least four co-morbidities. Why is this just coming out now..? Because the [D]eep [S]]tate knows that the game is up.
https://summit.news/2022/01/11/cdc-admits-over-75-of-covid-deaths-were-people-who-had-at-least-four-comorbidities/
A study shows that the [C]ovid survival rate for under 20's is 99.9987%. It proves that jabbing children is evil and it must be IMMEDIATELY stopped. This study's findings confirm that [C]ovid is a mild disease in all but a small minority of cases...this virus is well below a level where restrictions are justifiable.
https://summit.news/2022/01/11/professor-covid-survival-rate-for-under-20s-is-99-9987/
Finally, Relentless Truth with a great Q drop connection to date January 19th. The 'CURE' will spread WW...THE SHOT HEARD AROUND THE WORLD. 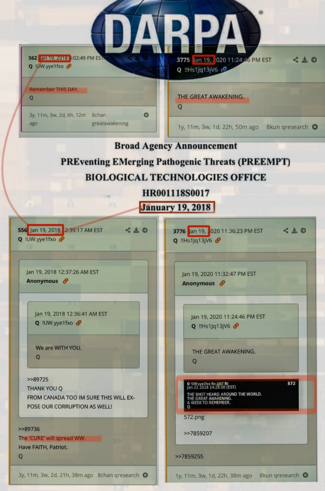 The 'CURE' that is spreading worldwide is the Alliance-released Omicron variant, providing immunity for humanity. 'THE SHOT HEARD AROUND THE WORLD' could be the arrest of [F]auci.
It is quite possible that the world will be a very different place before the end of this month. When it DOES happen, there will be massive vindication for Light Warriors. The urge to say, 'I told you so...' to the sleepers may be overwhelming. We must not give in to it. Compassion for their ignorance and willingness to be so mind-controlled.
Oh, and 19th January is National Popcorn Day in USA.
WE'VE GOT THIS.
Thank you for reading this post. You are welcome to share it as long as you re-post it in its entirety, including the link to my blog site.
Where We Go One We Go All.
Love and Light
Sierra