Details Can Be Distracting

January 16, 2022
On reflection, it could possibly have been President Trump speaking at the rally, not a double. The hat and lack of a tie certainly put us off the scent. It was something Sarah blog reader said that made sense to me. We have been seeing a lot of the Trump double lately and we have got used to accepting him as the real person. Having said that, this could have been a DIFFERENT double. So tricky...!
Do you know what...? It's not about the details. It's about the Alliance plan to liberate humanity, and it's about Ascension, both personal and collective. How we achieve those goals does not hinge on knowing every plot twist and turn of what is essentially a MILITARY operation. By the very definition of the word military, most of the current action is strategizing behind the scenes before they unleash their devastating killer blow on the [D]eep [S]tate. As Q said, we only get one shot at it. It has to be flawless.
The International Court in Brussels has delivered a sensational verdict in the case against the [D]eep [S]tate. Wonderful news.
https://commonlaw.earth/iclcj-verdict-and-sentence/
I resonate with this summary of President Trump's apparent revised stance on the jab. I believe his optics were for a vital reason - to save humanity from a far worse fate than we have experienced for the last two years. 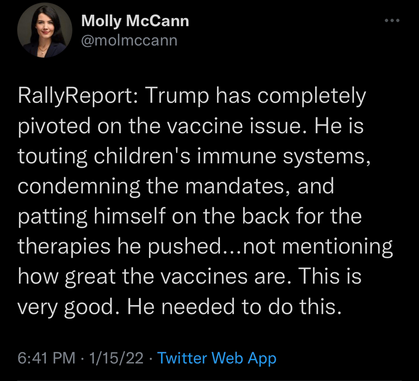 I believe President Trump is signaling that we are very close to the end of the movie. I am so glad this s---show is nearly over. As many Anons are commenting, President Trump looked tired, as if he's had enough of this s---show too. Every Light Warrior on this planet is over it.
I am tired today. Around every 4-6 weeks, I hit the wall with warrior fatigue. Today's weariness has been exacerbated by the awful news that NZ started jabbing 5 - 11 year olds today. And shockingly, a national supermarket is bribing parents with vouchers to get their children jabbed. This is worse than bribing with junk food - parents can find the strength to refuse junk food. But food from the supermarket, when money is already so tight? It is heinous.
Speaking of jabbing children, this is appalling intel about Pfizer - they quietly added a heart attack drug to their vax for children because they KNOW it is causing serious heart problems. Their evil knows no limits.
https://gab.com/QAnon211/posts/107632096586282419
Even the WHO does not recommend routinely jabbing children for the virus.
https://gab.com/BeachMilk/posts/107635341517616401
The Pfizer CEO finally admitted that two doses of their jab is virtually useless. Wake up, people!
https://gab.com/BeachMilk/posts/107631911948908013
This morning I was listening to my neighbors chatting while I worked in the garden. They are fixated on 'that awful tennis player...serves him right...what was he thinking, not being jabbed...he deserves to be sent home...' Their gossip is being fed by obsessive MSM coverage here in NZ of the incident. When the truth is revealed, they will look back and realized that Djokovic was on the right side. Until then, patience. Sigh.
A potential explanation for the 'volcanic eruption' in Tonga that is now widely believed to be a detonation.
https://gab.com/BeachMilk/posts/107632288969996982
An Anon wrote a post about how the sleepers will react when they discover the truth about the jab. It's along the lines of what we have been discussing on this blog.
https://gab.com/Lebronsonroids/posts/107633967117550522
Finally, maybe because I am a bit tired, this little video brought tears to my eyes.
https://gab.com/QAnon211/posts/107631481923344179
Keep your Light shining brightly, World Patriots. Keep Unity Consciousness uppermost in your mind - it is the antidote to all the divisive propaganda that is sweeping through humanity. We are in this together. You are not alone.
WE'VE GOT THIS.
Thank you for reading this post. You are welcome to share it as long as you re-post it in its entirety, including the link to my blog site.
Where We Go One We Go All.
Love and Light
Sierra