January 18, 2022
Police investigations are underway all over the UK into authorities, including the government and mainstream media, who are responsible for jab injuries and deaths. The charges include treason and murder. A must-watch video (4 mins).
https://gab.com/BeachMilk/posts/107642850028891550
President Trump put out an intriguing message about his new Miami golf course called Blue Monster. I was discussing this message with a Light Warrior friend - he got a download about two possible meanings to Blue Monster.
Firstly, Blue Monster could refer to Cthulu, the 'mythical monster' that lives deep under the ocean and is said to control all evil entities. Here is the Wikipedia entry about Cthulu. https://en.wikipedia.org/wiki/Cthulhu
My friend said that the Tongan detonation could have been a Rod of God that was plunged into the volcano to destroy Cthulu. The detonation definitely was NOT nuclear, as some Anons are speculating. The Creator banned all nuclear detonations in all multiverses decades ago because of the catastrophic damages to souls.
Secondly, Blue Monster could be the Democrats. It would be cause for celebration for President Trump to remove his tie for a rally (deal done) with the official capitulation of the Demonrats.
I think we Light Warriors can agree that the action is heating up, and the next few days look promising. The US Army has posted an interesting meme that seems to confirm imminent action. 17 booms (Q) BOOM! 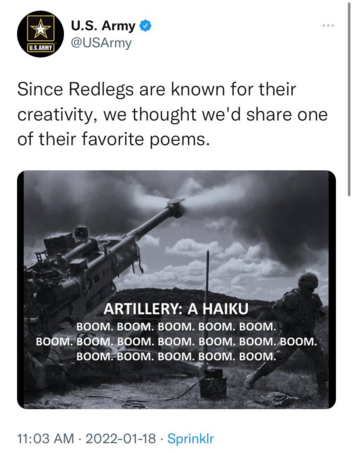 When President Trump referred to Red, Gold and Silver (going up) in his message, I think the Red refers to the Republican Party as per this graphic.
https://gab.com/MajorPatriot/posts/107638548323553656
A reminder from Relentless Truth about the importance of 20th January to the Alliance Plan.
https://gab.com/Lebronsonroids/posts/107638985276169934
Finally, Light Warrior actor Kevin Sorbos with some dry humor.

This movie is reaching the climactic scene, where we will be too mesmerized by the action on the screen to eat our popcorn. Stay calm and positive. We have developed extraordinary patience in the last few years. Now it finally pays off.
WE'VE GOT THIS.
Thank you for reading this post. You are welcome to share it as long as you re-post it in its entirety, including the link to my blog site.
Where We Go One We Go All.
Love and Light
Sierra