January 19, 2022
UK Prime Minister Boris Johnson has ENDED compulsory jab mandates and passports and mask wearing. This is huge news, Light Warriors. It proves without doubt that the Alliance is in full control. Video of Boris making the announcement (2 minutes). For God's sake, will someone PLEASE cut that man's hair...???!!
https://gab.com/QAnon211/posts/107648965808776559
Wow, it looks as if the UK police have switched sides. They are shutting down jab buses and turning them into CRIME SCENES. I can't wait to see that happening here in NZ where pop-up clinics are working feverishly to jab our beautiful innocent children.
https://gab.com/BeachMilk/posts/107649042372505622
The Czech Republic has also backed down on jab mandates, refusing to divide their society. Watch for more countries to quickly follow suit as the jab narrative crumbles daily. Aussie and NZ will be the last to go, unfortunately. NZ is the first country in the world to see the sun, and usually last on the list for liberation. We will prevail.
https://gab.com/disclosetv/posts/107649966395226242
Well, lookey here - even GOOGLE agrees that the narrative is crumbling. Love it.
https://gab.com/threesevens/posts/107649846113190636
Q said, 'They [DS] won't be able to walk down the street...' when people learn the truth. Watch these young people screaming 'Liar!' at Nancy [P]elosi and she is powerless. BOOM.
https://gab.com/QAnon211/posts/107649908684164580
A graph that proves the jab IS the virus. Israel and Australia, two of the highest jabbed countries, have sky-rocketing virus numbers. I know it's true because I have a Light Warrior friend in Sydney who gives me the numbers every few days. CRIMINAL.
https://gab.com/QAnon211/posts/107651234141345745
Further proof that the jab is the virus. Wake up, people...!
https://gab.com/Footdoc/posts/107646875916700380
Please use your discernment with this video - the man describes what he believes to be night time interior demolition of the White House. Whether it is true or not, there is a concrete DEMOLITION wall around the exterior of the White House. All signs are pointing to the destruction of one of the evilest buildings on the planet (along with the Vatican and Buckingham Palace).
https://www.youtube.com/watch?v=nKGR4FGUJ-k
BP at Starship Earth reports that a concrete demolition wall is also being built around parliament buildings in Ottawa, Canada.
The delicious irony of Prince Andrew deleting all his social media accounts on US National Popcorn Day. Priceless. Enjoy the show, Light Warriors.https://gab.com/PepeLivesMatter17/posts/107651032434254005
Bill [C]linton's clone must be sweating up a storm along with No Longer Prince Andrew. A UK socialite just threw them both under the bus. Awesome.
https://gab.com/QAnon211/posts/107649285849838606
Mask madness is now an official disease. It's no surprise to see the long-term harmful damage caused by prolonged mask-wearing. Here in mid-summer New Zealand, nearly ALL retail staff wear a mask for nine hours a day. It is quite common to see people wearing them outdoors or while driving. Mask psychosis is real.
https://www.naturalnews.com/2022-01-17-mask-asphyxiation-disease-sweeping-across-america-world.html
Candace Owen with a brilliant post about the Scamdemic. Pass it on. 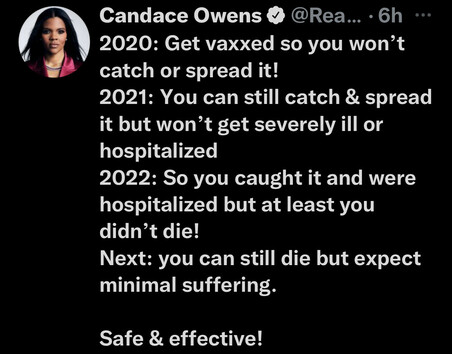 The threat of a third jab to keep her job has woken up a double-jabbed Aussie woman. She is FURIOUS. One minute video, a ton of F bombs, but she will do more to awaken humanity than all the polite anti-vaxxers in the world.
https://gab.com/BeachMilk/posts/107648892288149357
Yes, Light Warriors, jab remorse is here - we knew it would happen. Compassion, compassion, compassion. 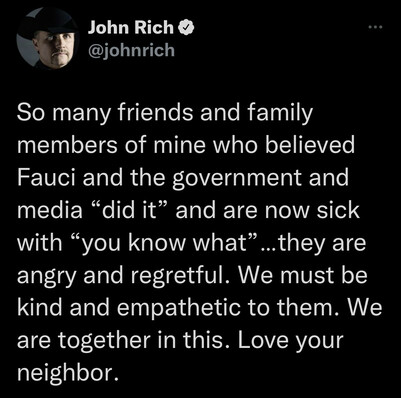 If I can recommend anything to you right now, it is this:  s...l...o...w down. The long-awaited powerful tsunami of Love/Light/Truth is finally crashing down upon humanity. Wave after wave after wave after wave. It is relentless (just like the name of one of my favorite Gab Anons). Nothing Can Stop What is Coming. S...l...o...w down. Don't miss anything. This is our VICTORY lap, friends. And it's just beginning...! Enjoy.
WE'VE GOT THIS.
Thank you for reading this post. You are welcome to share it as long as you re-post it in its entirety, including the link to my blog site.
Where We Go One We Go All.
Love and Light
Sierra