January 14, 2022
Three pieces of intel that prove the Alliance is in full control.
Firstly, the Supreme Court has over-turned [B]iden's jab mandates for large businesses.
https://gab.com/realdonaldtrump/posts/107617253143037600
Secondly, Prince Andrew has been stripped of all his military titles and patronages. BOOM. How's that deodorant working for you now, Andy...??? 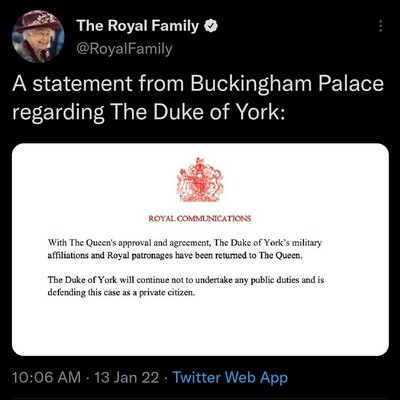 Thirdly, the UK government is ending jab mandates on 29th January. Add this to the US Supreme Court decision, and you can see how this Scamdemic could be over before the end of the month.
https://gab.com/QAnon211/posts/107616379113821580
In his latest email newsletter, Rockwell described the current extraordinary military movement in USA, far exceeding normal military operations. The National Guard even arrived at the hospital where he works. Here is an excerpt...
Events are taking place that indicate we are truly in the last moments of the s'show.   Objective verifiable facts.   MonkeyWerx said there is a huge increase in supply planes moving across the entire country, way more than normal including activity this past weekend.  He said at one point there were 30 in air refueling planes in flight coast to coast.   He has never seen this before, and no current events justify this.  The east coast was blanketed in military craft from fighter jets, supply ships, helicopters, etc.  Huge cargo ships, namely C-17s and C-130's were taking off and landing all across the country.  Not just that, he said there was a massive amount of troop movement.   For their protection, MW never discloses where the troops are going to, but he said it was a massive amount of troops.
He showed us the officially posted activities scheduled at Gitmo, and according to their official site, all activity has been cancelled.  Despite this, he is seeing near record traffic into Gitmo.   Anyone surprised to learn Adam Piece of Schiff just called AGAIN for the closure of Gitmo, the place where he will be sent to be judged in the after life?
Then another anon did his own investigating, and what he found is astonishing.   ALL command centers for all national guard in ALL fifty states and four US territories have been ACTIVATED.   He said he has never seen this before, especially outside of war time, and it is even unusual for war time.  Other anons are verifying this is true.   Remember, my hospital was visited by a huge contingent of NG troops this weekend and told they needed immediate testing to be ready for "operations".  Nat'l Guard fighters and even Coast Guard auxiliary have been activated.  Here's the reality.   This means there is a major military op about to take place, and all we are left to do is figure out what it is.   Not just that, it looks to be a DOMESTIC operation.   Q has told us the military is the ONLY way, and I am going to assume this is THE moment. (Rockwell)
I will keep this post brief. It's been a busy day - a fun day - and I have not had much time for research.
As I said in the previous post, be prepared. When the first big domino falls, it will still catch us Light Warriors by surprise, even though we have been waiting for it for years! That's why it pays to keep up to date with food supplies, chores around the house, anything that would distract you when you most need to be clear and focused.
WE'VE GOT THIS.
Thank you for reading this post. You are welcome to share it as long as you re-post it in its entirety, including the link to my blog site.
Where We Go One We Go All.
Love and Light
Sierra