January 25, 2022
A newly-released book is set to drop a gigantic truth bomb upon humanity. It is titled 'RED-HANDED - How American Elites Get Rich Helping China Win' by Peter Schweizer. Could this be part of the RED wave referred to in Q drops?
https://link.breitbart.com/view/5d13d904fc942d626ccd7ea9fqlkd.2pj0/9677d85b
The red-hot book stormed up the Amazon charts in the first 24 hours - Amazon froze their data in a blind panic. A bit like trying to stop an avalanche with a teaspoon, wouldn't you think...?
https://gab.com/MajorPatriot/posts/107679623835362455
Spiritual channellings from years ago predicted that when the truth came out, it would be from all directions, all at once, at a speed that would be completely bewildering, even for Light Warriors. We are about to step over that threshold, friends. Here is the cool Aussie guy in the red singlet who tells the truth about the massive fallout when the jabbed people realize what they have done. Hey, just realized - red singlet, Red Pill. Very cool.
https://www.bitchute.com/video/sriUnP4Ee14C/
I was thinking about the Aussie guy while I was standing at the kitchen sink (I get a lot of downloads there). The Alliance is forcing the [D]eep [S]tate THEMSELVES to tell the truth about what they did to humanity. That's why the UK government is publishing the truth, and many other governments are declaring the Scamdemic to be over. It may be why there is potentially no need for an EBS - the DS is doing the job of broadcasting the truth. It makes sense that the jabbed people's anger is directed at the genocide perpetrators, not President Trump and/or the Alliance.
Remember, if there is a WW3 scare event, it is part of the scripted Alliance-controlled movie. It's NOT real. They are war games being played out to awaken humanity. Russia was always destined to be at the heart of this operation. Blog reader Faith reminded me that seventy years ago, Edgar Cayce prophesized that a Russian leader would save humanity from WW3. Bingo.
I agree with this post about Putin playing war games to expose the [D]eep [S]tate, especially [B]iden and the global media. Q: 'You can't tell the people; you have to show them...' What did we do before Q..???
https://gab.com/QAnon211/posts/107682785109898449
Further proof that the Scamdemic is nearly over. The WHO European director says the continent is 'moving towards an end game scenario' for the virus. BOOM.
https://gab.com/PrisonPlanet/posts/107677371036265248
Another win for the Light - the US Supreme Court ruled NYC mask mandates as 'unconstitutional'.
https://gab.com/PepeLivesMatter17/posts/107680403484036261
This comes at a time when Horseface (our NZ PM's popular nickname) has tightened mask mandates here. I believe the Alliance is forcing her to do it to WAKE KIWIS UP...!! The number of mask-wearers in this country is...well, quite frankly, I don't have the words.
This example of the heinous evil of the [D]eep [S]tate must never be forgotten.
https://gab.com/BeachMilk/posts/107685687868842241
Another short video of the Canadian truck convoy. A reminder, this convoy is 70 kilometres long and involves around 50,000 trucks. Goosebumps - and not from the cold.
https://gab.com/QAnon211/posts/107683743437435459
A Canadian woman police officer honors the truckers in a short video - she will be in Ottawa to meet them.
https://gab.com/QAnon211/posts/107681919817379938
Interesting. What is Melania Trump communicating with this new pic of her famous stunning White Hat..?? 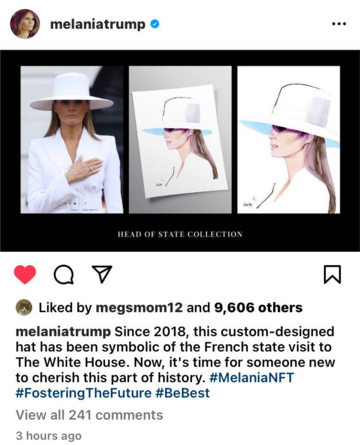 Blog reader Deb asked me to talk about Ascension symptoms. Happily. Here is an update of my current list...
Still totally disinterested in food - if I develop a small interest in some food item, I get excited. Becoming even more sensitive to scented products, scratchy fabrics, loud noises. Dizzy spells out of nowhere. Occasional heart palpitations for no reason. Ravenously hungry late at night when about to head to bed. Time perception non existent. Huge downloads from Upstairs that send me rushing to the phone to share with close Light Warrior friends. And lots of other things I will remember after I publish this post - because many thoughts disappear before they even get a chance to form fully. Memory, what's that...??
Finally, I have two Light Warrior friends with new kittens. This little video is for them (and you if you like cute kittens).
https://gab.com/QAnon211/posts/107685385435722244
Keep smiling, Light Warriors. The Alliance Plan delights me anew every day. There is so much about the Plan that we don't know - that we may never know - but one thing is crystal clear: WE ARE WINNING.
WE'VE GOT THIS.
Thank you for reading this post. You are welcome to share it as long as you re-post it in its entirety, including the link to my blog site.
Where We Go One We Go All.
Love and Light
Sierra