August 31, 2022
Cue said: TRUST WRAY. Look what is unfolding - we are now watching the movie in real time. BOOM.
https://gab.com/QAnon211/posts/108917879159566783
As I wrote in a previous post, Cue also said: TRUST GRASSLEY. Maybe it is time for the doubters to trust Cue, President Trump, the Alliance and the Divine Plan. After five years of extensive daily research, I still have the same unshakable faith I had when I read the first Cue drop on 28th October 2017.
President Trump posted an astounding 92 posts yesterday on Truth Social. 9+2=11. He also re-truthed an Anon post that featured Cue drop 11.
Cue said: Military is the only way.
Here is Cue drop 11.
Key:
Military Intelligence v FBI CIA NSA
No approval or congressional oversight
State Secrets upheld under SC
Who is the Commander and Chief of the military?
Under what article can the President impose MI take over investigations for the 3 letter agencies? What conditions must present itself? Why is this so VERY important? Who surrounds POTUS? They lost this very important power _ the one area of the govt not corrupt and directly serves POTUS.
If he becomes Prime Minister, Canadian MP Pierre Poilevre has promised Canadians: 'I will ban all my ministers from any involvement in the World Economic Forum...' Watch the crowd erupt in cheers.
https://gab.com/QAnon211/posts/108916249941543799
A critical labor shortage in Australia has produced a chilling potential solution - child labor. Governments are calling for children as young as 13 to be brought into the workforce. New Zealand is also experiencing a critical labor shortage across many sectors. No one is asking the BIG question: What happened to all the workers....??
https://gab.com/BeachMilk/posts/108916325265548271
This was the front page of a New Zealand newspaper yesterday. It is appalling that the mainstream media is running a massive smear campaign against candidates for local office.
https://www.stuff.co.nz/national/129640451/former-principal-and-current-councillor-among-seven-tasman-candidates-with-links-to-conspiracies-and-disinformation
A woman with 'jab remorse' lists all the side effects she has experienced. Sadly, she is not alone.
https://gab.com/BeachMilk/posts/108915512140954918
Here is another one...
https://gab.com/QAnon211/posts/108919156424349822
This rendition of Star Spangled Banner gave me goose-bumps. Beautiful. Enjoy.
https://gab.com/BeachMilk/posts/108916516570531058
Finally, this President Trump re-Truth was one of the posts from his marathon posting yesterday. Love it. 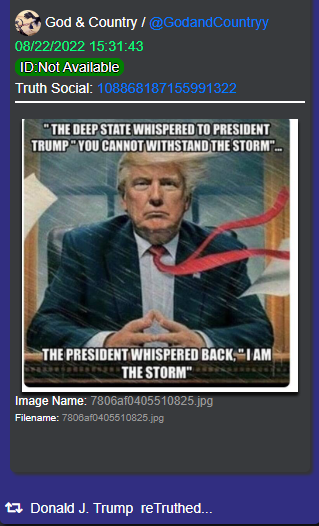 We are at the precipice, Light Warriors. At last.
President Trump has promised BIG disclosures at his rally this coming weekend.
Stay positive and calm. We signed on for this mission knowing that the Alliance would have to play the long game. Cue always said: 'It had to be this way...'
WE'VE GOT THIS.
Thank you for reading this post. You are welcome to share it as long as you re-post it in its entirety, including the link to my blog site.
Where We Go One We Go All.
Love and Light
Sierra