August 17, 2022
Today's top billing goes to a feisty older Canadian Light Warrior who tells the TRUTH about the UN and WEF while he trims logs on his farm (great physique for his age!). Please help his video go viral. We need a lot more REAL men like him on this planet.
https://gab.com/BeachMilk/posts/108837424053581171
Judge Jeanine Piro is on fire during a Fox News segment regarding the illegal FBI raid on President Trump's house. Short video. Riveting.
https://gab.com/QAnon211/posts/108840451682618600
Meanwhile traitorous Liz Cheney experienced a resounding defeat in her election bid. 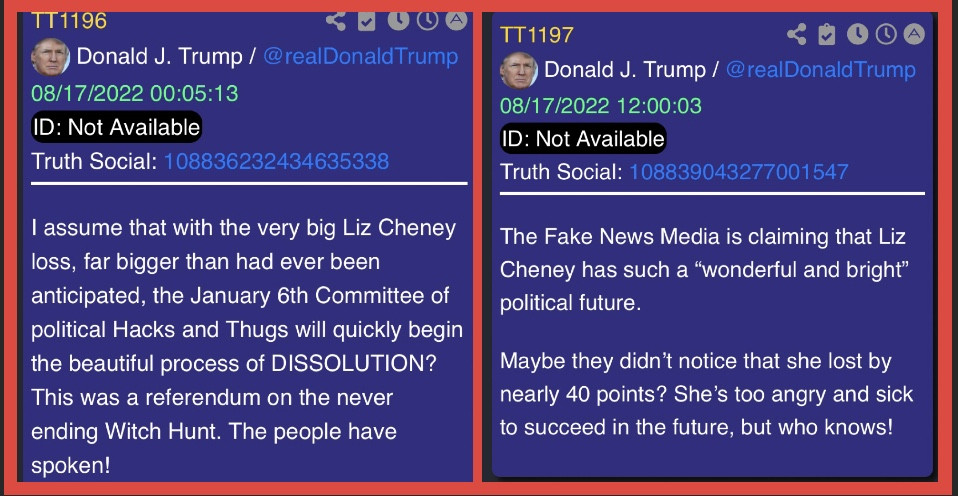 Cool little video about Liz Cheney's political demise. Enjoy.
https://gab.com/QAnon211/posts/108839710036811878
Go, Tucker Carlson. He dug into Liz Cheney's financial records and discovered that she made $36 million dollars PROFIT during her six years in Congress. Where DID all that money come from, Liz...??
https://gab.com/QAnon211/posts/108838175236419976
Here is Tucker again with an excellent segment on [E]pstein's client list. Great background for anyone who is not fully up to speed with [E]pstein's horrific legacy.
https://gab.com/QAnon211/posts/108836726702619640
I took the time to watch this 16-minute video about Mexico/USA child trafficking that is openly PAID for by [B]iden's administration. The whistle-blower is from one of the federal contract companies - he said about 30-40,000 children a month are being flown from camps in Texas to locations through US - all done in top secrecy at night. It is chilling. Recommended viewing. Great young interviewer.
https://thepostmillennial.com/breaking-biden-whistleblower-exposes-secret-night-flights-of-illegal-immigrant-children-thousands-of-kids-per-week/
The Aussie MSM is suddenly telling the TRUTH about the 'clot shot' - BUT only about Astra Zeneca. As commenters said below this video, obviously Pfizer and Moderna are paying the MSM to shoot down AZ, and AZ cannot afford to fight back. It's a dirty war in jab-company territory.
https://gab.com/BeachMilk/posts/108837775429230494
No surprises here - official confirmation that the more jabs you have, the more likely you are to get re-infected. Of course, duh. The jab IS the virus.
This information is backed up by official NZ government data. Watch the video. See how the 'expert' neatly side-steps the question of WHY New Zealanders are SEVEN TIMES sicker this year than in pre-jab 2019.
https://www.thegatewaypundit.com/2022/08/double-vaxxed-new-zealanders-seven-times-sicker-year-pre-covid-2019-video/
Brilliant little montage of mask madness in this short video. Love it. Thanks to blog reader Vee for passing it on to me.
https://gab.com/MapleGal711/posts/108816930349892448
Finally, I am including this cute little video...just because. We all need a smile right now.
https://anonup.com/upload/videos/2022/08/LkDL3QKDaXpgzObVeVEU_17_0038521a2d49504844f14ea5b4247748_video_original.mp4
It is still raining heavily in my region. Several hundred people have been evacuated from their homes as rivers have burst their banks. This kind of weather event is unprecedented. It has been described by weather officials as 'an extreme atmospheric river'. Now there is an interesting term for DS weather weaponry.
Stay positive, Light Warriors. No matter what the dark forces throw at you, you have the strength to endure. We WILL prevail.
WE'VE GOT THIS.
Thank you for reading this post,. You are welcome to share it as long as you re-post it in its entirety, including the link to my blog site.
Where We Go One We Go All.
Love and Light
Sierra