August 12, 2022
Here is the next step in the Alliance operation as it closes in on [O]bama. 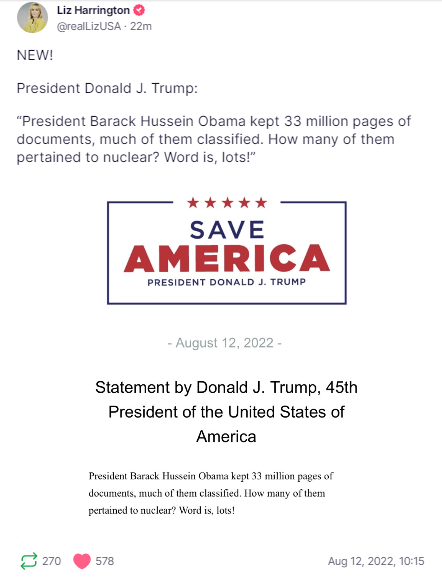 The FBI raid on President Trump's house is looking more and more like an Alliance sting with two purposes. Firstly, it is shining a Light on the absolute corruption of the USA alphabet agencies and political system. Secondly, the whole world is now watching - an ideal platform for the first arrest.
The four year anniversary for this Cue drop is extremely important.
https://anonup.com/@TN4Q

Dan Scavino posted a blank orange page on social media.
https://gab.com/QAnon211/posts/108808578444077933
This theory related to the Cue drops is VERY interesting. We Anons have always been intrigued by the Cue references to the movie Godfather 3.
https://anonup.com/@TN4Q

Godfather III
Before they are murdered by assassins in a helicopter, an orange rolls off the table.As Michael Corleone dies at the end of part III, he drops an orange and it rolls away. 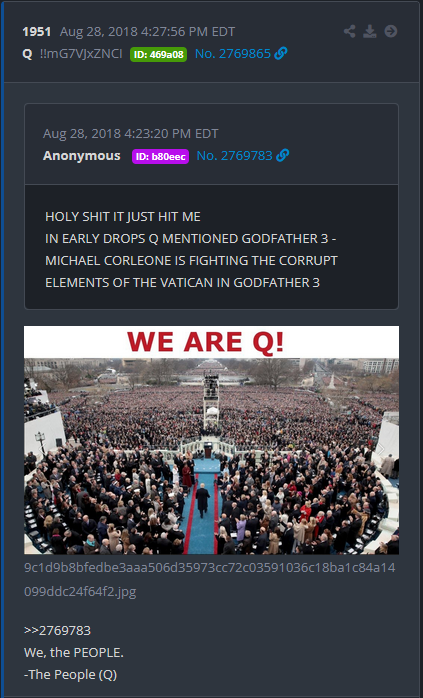 Clandestine's take on the evolving FBI raid/threats to arrest President Trump is excellent, as always.
Lmaoooo the Left’s narrative all day long has been:“Trump doesn’t want us to see those documents or the warrant or the affidavit! He’s going to try to cover it up cuz he’s guilty of… we don’t care just arrest him!”Now their hopium is running out, as Trump is calling for transparency. The Left are feeling it. This FBI raid has not produced the Trump arrest they have been eagerly anticipating, AND it has been catastrophic to any remaining DNC midterm hopes.Played like a fiddle.
-Clandestine
We can never have too many reminders that the various versions of [B]iden are lead actors in a Hollywood presidency.
https://gab.com/BeachMilk/posts/108808852124221401
This meme is a welcome reminder that it's not life that is the problem on Earth - it is the [D]eep [S[tate systems that have kept us enslaved for millennia.
Light Warriors who came to Earth to liberate humanity are known by the Galactic Federation as 'system busters'. We have done this work on many other 3D planets. We are experts. We came to Earth to help restore this beleaguered planet to its original state as a Garden of Eden, a place of recreation and beauty to be enjoyed by all in Creation. Remember that Earth is actually Gaia, an immensely powerful Archangel who lent her essence to humanity. She has done her job magnificently and now she wants to go home - and she wants as many of us as possible to go with her.
Finally, a reminder to always be your authentic compassionate self, no matter what is going on around you. THAT is how we are defeating the dark forces, one smile and hug at a time.

WE'VE GOT THIS.
Thank you for reading this post. You are welcome to share it as long as you re-post it in its entirety, including the link to my blog site.
Where We Go One We Go All.
Love and Light
Sierra