It's An IQ Test

July 24, 2021
Thanks to my friend Nancy for sending this brilliant quote...
It's not a pandemic - it is an IQ test.
I love this quote too...
Freedom is not free - you have to FIGHT for it.
President Trump emphasised the importance of FIGHTING for our freedom in his speech today. We are all enslaved on this planet - every one of us who is not part of the 1% [s]atanic elite. We have two choices as slaves: we meekly accept our fate, or we FIGHT to break free. I choose to fight. Please join me!
Here is a short video of President Trump giving the air Q signs at his rally. Enjoy.
https://gab.com/PepeLivesMatter17/posts/106638700933343431
Give me a break. This article proves that the [D]eep [S]tate lamestream media is out to make fools of us.
https://www.the-sun.com/news/3341879/covid-farting-ministers-claim/
A video from a big protest in Italy...
https://gab.com/PepeLivesMatter17/posts/106636983111148162
This video from the massive London protest made me feel very emotional. We The People are fighting back.
https://gab.com/destroyingtheillusion/posts/106636567569452666
This is an excellent strategy - fighting back with smarts. 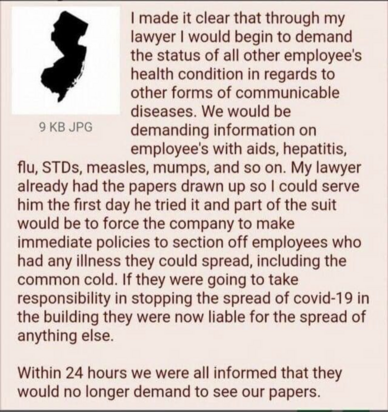 Finally, my lovely nephew Leighton lives in Perth. He's awake to the Scamdemic. He was taking his two young children to the local park when he accidentally became part of a big Perth Freedom Fighters rally. He said there were hundreds of cars, all tooting. He joined in - he said that it was his two year old son's first protest rally!
As he said, nothing was mentioned about it in the local media. The huge rallies in Sydney and Melbourne also didn't rate with the lamestream media. WE Anons are the news now.
The tide is turning. I sensed it in President Trump's speech. He knows there is a massive global army of Light Warriors fighting back hard against the [D]eep [S]tate. I notice in the speech that he referred several times to colleagues as 'warriors'. I have never heard him use that word before.
This is when we remind ourselves that we are the bravest of the brave, the strongest of the strong. Many wanted to be here - only a few were chosen. It is a huge privilege to be a Light Warrior on planet Earth.
Thank you for reading this post. You are welcome to share it as long as you re-post it in its entirety, including the link to my blog site.
Where We Go One We Go All.
Love and Light