Plandemic Over: Bring It On...!

January 14, 2022
I am opening this post with a glorious image that will gladden the heart of every Light Warrior. Bring it on...!
https://gab.com/QAnon211/posts/107622299555558245
Apparently Bill [G]ates has stated that [C]ovid should now be treated like seasonal flu. Official capitulation..? Of course it's a body double/clone that is speaking on his behalf - the original Gates was executed at GITMO. Thanks for the reminder, Dave!
Mexico has opened its borders to tourists with no restrictions whatsoever - holidays like it used to be before 2020. Love it.
https://twitter.com/backtolife_2019/status/1481883090624602112
Further good news - GE Electric has suspended jab mandates and testing for its employees, citing the Supreme Court decision. This is awesome news. When a big company like GE Electric pulls out of the Scamdemic, other big businesses will be forced to consider their own stance.
The 'EU Science Committee' admits that on-going booster shots HARM the immune system and should not be administered. BOOM.
https://gab.com/BeachMilk/posts/107623602440074465
Hospital whistle-blower with irrefutable TRUTH about the jab. Short video, recommended, pass it on.
https://gab.com/BeachMilk/posts/107623643196977644
Jim Carrey could be speaking ironically in this short video. The jury is out on his position on the dark/light continuum - he has [s]atanic connections.
https://gab.com/BeachMilk/posts/107623622030578527
A ten foot high steel reinforced concrete wall has been built around the White House, effectively walling it in. Also the White House live camera feed, which always runs 24/7, has been cut. Wake up, people! Something YUUUUUGE is happening in Washington DC.
Anons are buzzing over strong rumors that Q will resuming posting - and that we might soon see the magic message from President Trump: 'Fellow Americans, the storm is upon us...'. Followers of Q have been waiting for that message for a long time.
President Trump is holding a rally in Arizona on 15th January. It's a great venue - a canyon ranch in the desert. I watch his rallies on Newsmax because the feed is usually clear and rarely breaks down.
Speaking of Q and President Trump's rally, Cowboyw2b has come up with a great Q connection to the rally.
https://anonup.com/@Cowboyw2b
Trump rally on 1.15 = High noon on the Qclock. 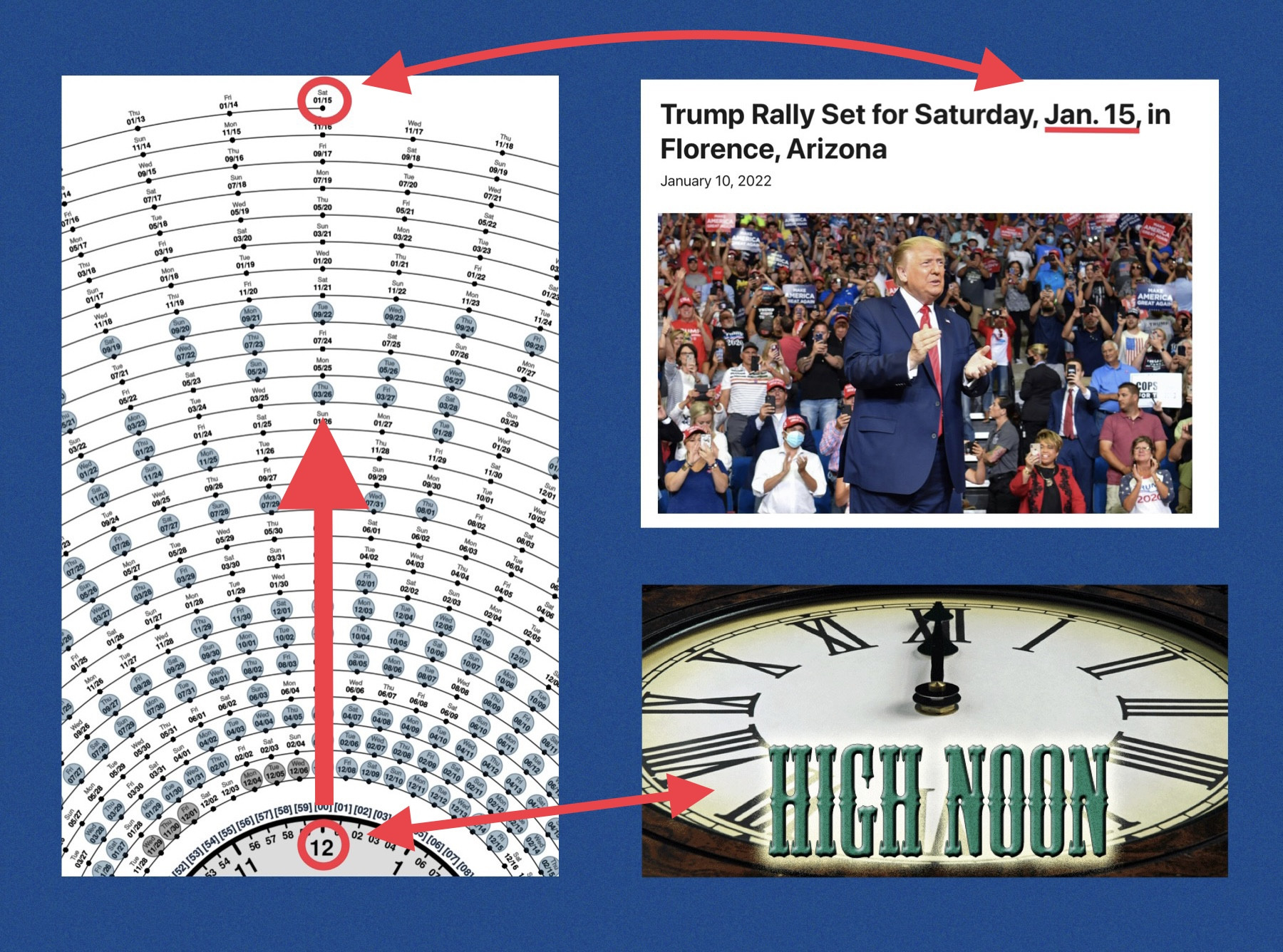 Finally, the Q words 'Scare Event' keep playing in my mind. I am sure that we are very close to an event - whatever it is - that will bring the entire population on this planet to its knees in shock. What could be frightening enough to achieve that result..? Well, Tarot by Janine has a theory, and although it may seem pretty wild, there are other Light Warriors talking about the same thing. There could be scenes of mass shock when the Event happens. Here is Janine's video:
https://www.youtube.com/watch?v=bLB923BXsSU&t=952s
Today I have been reflecting on the staggering amount of change that has transpired in my life within the last 12 months. I have many new friends, most of whom I didn't even know a year ago - in some cases, a few weeks ago. I have replaced old appliances in my home that I have had for decades. There are daily routines that I did for many years that I don't do any more, and there are some new ones that I instigated only months ago.
The reason why the sleepers mask up and blindly follow the [D]eep [S]tate narrative is because they fear change. They crave comfort and security. Comfort and security for them is a shopping mall full of muzzled faces - hundreds of people just like them, so they must be okay.
Meanwhile, out on the edge of the precipice, you'll find Light Warriors charging forward, swords raised. Comfort and security - what's that...???
WE'VE GOT THIS...!
Thank you for reading this post. You are welcome to share it as long as you re-post it in its entirety, including the link to my blog site.
Where We Go One We Go All.
Love and Light
Sierra